Becks vs. Ian. Orlando vs. Johnny. Tell us: Which summer guy has the hottest body? By Aaron Parsley and Cara Lynn Shultz

New L.A. Galaxy star David Beckham went "skins" as a Real Madrid footballer while Dancing with the Stars contender Ian Ziering worked the net – and those pecs! – during a Malibu beach volleyball game.

Beach boy Matthew McConaughey made waves during a surf session, while Prison Break star Amaury Nolasco grinned and bared almost all at the Polaroid Beach House.

Hugh Jackman took the plunge in Queensland, Australia, during a holiday with kids Oscar and Ava (not pictured), while Mario Lopez also made a splash on vacation, hitting Coronado Beach in San Diego with family.

What was missing from Newlyweds and The Princes of Malibu? More shirtless footage! Luckily, cameras caught a pec-tacular Nick Lachey in Tampa, Fla., while Brody Jenner cooled off in the Malibu surf.

Dead Man's Chest? Hardly. Orlando Bloom flexed his muscles in Hawaii, while his Pirates of the Caribbean costar Johnny Depp showed off his treasured body in the Mediterranean.

John Mayer hit all the right notes while strolling shirtless along Tallow Beach in Queensland, Australia. Back in Los Angeles, Dave Navarro showed off a toned and tattooed torso on his way to the gym.

Longoria's husband Tony Parker displayed his basketball build during their vacation in the South of France, while her former Desperate Housewives costar Jesse Metcalfe showed off his game in the Bahamas. 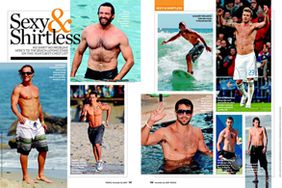 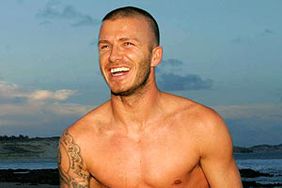 Who has the best chest?

Matthew vs. The World: Vote for the Hottest!