Whoopi Goldberg doesn’t want to hear trash talk from people who think her doing “Hollywood Squares” is a major comedown for the Academy Award winner. “I don’t need to have three films coming out and watch my hair fall out worrying about the opening weekend gross,” Goldberg says in the new TV Guide. “I like this schedule and the money is good.” Through her clout, the “Hollywood Squares” center square and executive producer has been able to get such guests as Robin Williams, Billy Crystal, Danny Glover, Melanie Griffith, Rosie O’Donnell, Trisha Yearwood and Garth Brooks. “Some of them are doing this as a favor to me. Some figure it can’t hurt their careers,” Goldberg said. “I cherish all the people who have said yes because they don’t care what the perception is.”

Will You Marry Me? 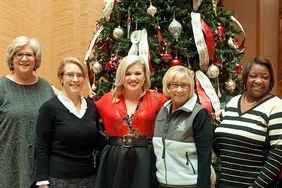