Brad, Johnny, Viggo and other hotties love to experiment with facial hair. Are they better with beards? Vote now. By Emily Fromm

A dye job and a few days sans razor transformed Pitt from rosy-cheeked golden boy (right, last year) to brooding outlaw (in New York City this month) for his starring role in The Assassination of Jesse James. In 2002, when he grew a long beard for a role in The Fountain, then-wife Jennifer Aniston said, "I do like the beard. It's soft." Let's hope Angelina Jolie agrees.

Of his island-castaway stubble (left, at the Emmys this month), the actor tells PEOPLE, "I've gotten used to it on Lost, and now I feel naked without it." But there's an upside to playing it smooth (last year): "I like being clean-shaven because I get to kiss my wife, Yessica, more. She doesn't push me away."

Although Depp looks boyish when clean-shaven (right, in London last year), his whimsical approach to facial hair (in Toronto this month) is a holdover from his childhood: "I was 3 years old and my mom and dad dressed me up as a hobo for Halloween," he says. "The only difference between now and then is that then they drew more beard on me than I can actually grow."

He goes whiskerless (right, last year) in his new movie, A History of Violence, but the actor has an affinity for the '70s-style handlebar mustache (in Cannes in May). His relatives in Denmark must be disappointed: When they heard a (false) rumor that he was dating Gwyneth Paltrow a few years ago, they told him, "Maybe she'll make you pay more attention to your own grooming."

Although Ledger has long been a fan of the slightly scruffy look (left, last year), he showed off his baby face recently (in Hollywood in May). Perhaps he learned to appreciate smooth skin after filming Brokeback Mountain with onscreen love interest Jake Gyllenhaal. Asked about shooting the kissing scenes, Gyllenhaal said, "I'll answer with one word, and the word is: exfoliate."

Clean-shaven, Jackman (right, last year) is harmless. But with even the slightest facial hair (at the Emmys this month), he's a menace: While filming 2001's Someone Like You with Ashley Judd, "I had this two-day stubble and Ashley was starting to look like Ronald McDonald, because I was ripping her to shreds when I was kissing her," he has said.

The formerly whiskerless star (right, in January) took fans by surprise with his salt-and-pepper beard (in Las Vegas in March). But he has clearly grown into his facial hair: When he sprouted sideburns for his role as a Wild West gambler in 1994's Maverick, he complained about the growth, ''It's itchy.''

Without facial hair, Reeves (right, in April) looks far younger than his 41 years – which is probably why he's become famous playing boyish innocents. But off-duty, the actor prefers a look that better suits his interests: riding his motorcycle and playing rock and roll. Of his ubiquitous scruffy beard, Reeves has said, "It's not for a movie, it's just for life." 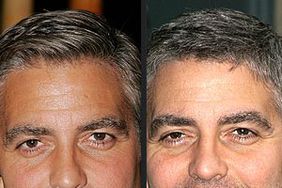 To Shave or Not to Shave

A New Kind of Cool