What Trouble? Pete and Ashlee Make Out on Stage

"Sorry, we haven't seen each other in a while," Wentz tells the MTV Australia Awards audience after a passionate kiss

Pete Wentz and Ashlee Simpson-Wentz dashed rumors of marital woes, proving the passion is still alive as they locked lips on stage during the MTV Australia Awards in Sydney on Friday night.

Simpson-Wentz, 24, who gave birth to her first child, Bronx Mowgli, with the Fall Out Boy front man last November, appeared smitten with her husband when she made a surprise appearance halfway through the music channel’s show.

Showing off her svelte post-baby body in a thigh-skimming black mini dress, Simpson-Wentz explained she had been busy with “some acting work going on and just being a mom” before instructing the crowd to “grab the person next to you.”

Making good on her own instruction, she and her beau exited the stage holding hands before returning minutes later to kiss passionately for several minutes before the cheering crowd. Wentz, 29, his hands wrapped around his wife’s lower back, then told the audience, “Sorry, we haven’t seen each other in a while. We’re going to go and find some quiet time and fornicate somewhere.”

The couple then high-fived as they left the stage, and again held hands. 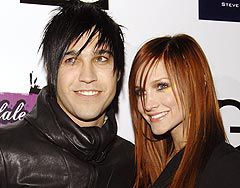 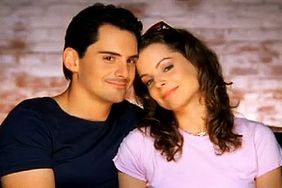