Plus: Lance Armstrong runs the NYC Marathon, country stars turn out for the CMAs and more

After promising Oprah Winfrey last year that she would show off her new body – in a bikini! – Kirstie Alley is making good on her word. PEOPLE takes an inside look, plus other events to watch out for in the coming week.

SUNDAY, NOV. 5: Seven-time Tour de France winner Lance Armstrong has decided to take on a different challenge – running the annual ING New York City Marathon. Though it’s his first race (without a bike that is) Armstrong recently said that he’s taking a casual approach to his preparations. “I’ve been training some, but I wouldn’t call it serious,” he told the Associated Press. “It’s just something to fill a void in my life after I quit competing as a professional cyclist.” In addition to upping the star wattage at the race himself, maybe some of Armstrong’s celebrity pals (Matthew McConaughey! Jake Gyllenhaal!), will show up to cheer from the sidelines.

MONDAY, NOV. 6: Never accuse Kirstie Alley of not holding up her end of a bargain. Nearly one year to the day after the former Fat Actress appeared on The Oprah Winfrey Show, she’ll show up once again – this time in a bikini, as promised. “I’d like to prove to myself, and maybe other women my age, that there can still be good years ahead of us,” she told PEOPLE. And while the stunt would have been more appropriate in, say, July, well, we’re proud of Alley for her hard work!

It’s billed as “country music’s biggest night,” but the CMA Awards (which air on ABC at 8 p.m. ET), also come suffused with the stuff that makes, well, compelling country music. Former Dancing With the Stars competitor Sara Evans – embroiled in a bitter divorce – will be on hand at the ceremony as will Sheryl Crow and Jon Bon Jovi. And one multiple-nominee will be conspicuously absent – Keith Urban, who is currently in rehab and had to pull out of the ceremony.

WEDNESDAY, NOV. 8: The competition is getting tighter on Dancing With the Stars (ABC, 8 p.m. ET). This week’s results show means big news: one pair will be eliminated, leaving the final two couples. Which celebrity will get cut? Will it be Joey Lawrence, Mario Lopez or Emmitt Smith? You’ll have to tune in to find out. 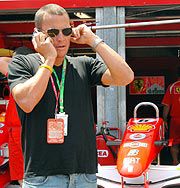 WEEK AHEAD: Lance Revs Up the Indy 500