"The heart of it is Loung's story, it's the story of a war through the eyes of a child, but it is also the story of a country," Jolie says in the clip.

Angelina Jolie is giving a first look at her new film and longtime passion project, First They Killed My Father.

The film is based on the autobiography of Cambodian human rights activist and friend of Jolie’s Loung Ung, and tells the true story of the devastation inflicted on Cambodia by the Khmer Rouge communist party in the 1970s.

More than two million people out of a total population of seven million were killed during the purge, including Ung’s father, mother and two sisters.

“The heart of it is Loung’s story, it’s the story of a war through the eyes of a child, but it is also the story of a country,” Jolie says in the clip.

In order to create an accurate portrait of the war, Jolie insisted on using only Cambodian actors, and the language spoken throughout is their native Khmer. The actors themselves are the survivors and children of the survivors of the genocide, and producer Rithy Panh hopes the experience of making the film will be cathartic for those who participated.

“In order to mourn we must speak,” says Panh. “It’s the possibility of using creation to reconstruct ourselves. Telling a story is also mourning, it’s also moving on.”

Jolie fell in love with Cambodia after filming Tomb Raider in 2000. Not long after she was finished with production, she returned to the country as a volunteer for the U.N. refugee agency, UNHCR, for which she is now a special envoy. In 2002, Jolie adopted her first child, Maddox, from a Battambang orphanage.

And it was Maddox who, after years of putting it off, convinced Jolie and Ung to make the film. “He was the one who just called it and said he was ready and that he wanted to work on it, which he did. He read the script, helped with notes, and was in the production meetings,” Jolie recently told The Guardian.

After years of working closely with refugees, Jolie decided to speak out against President Trump’s immigration ban on Thursday. In an op-ed published in The New York Times, Jolie wrote that the United States’ response to the refugee crisis should be “based on facts, not fear.”

“Refugees are men, women and children caught in the fury of war, or the cross hairs of persecution,” she wrote. “Far from being terrorists, they are often the victims of terrorism themselves.”

The world premiere of First They Killed My Father will be held in Siem Reap on Feb. 18, and will released globally via Netflix later this year. 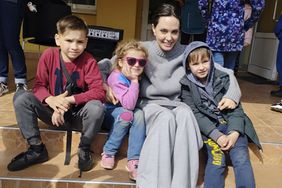 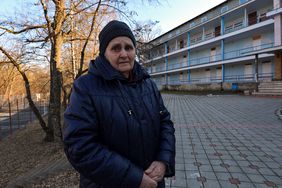