Not sure what we love more: those long lashes or lovely lips! Performers Nicki Minaj and Ariana Grande smush faces in this sweet #selfie.

"We're totally ready for our close-up!" Jordin Sparks captions this shot of herself and color-coordinated boyfriend Jason Derulo. "Congrats on your 2 #VMA nominations, @jasonderulo! I'm so proud of you, baby!"

No comment needed for this smoldering backstage snap of Sam Smith and pal Katy Perry.

Demi Lovato and pal Taylor Swift can't shake off that they ran into each other – and their faces show it! "Look who I got to see tonight!" posts Lovato.

Ed Sheeran and his "Sing" director Emil Nava show off their "we won" faces after taking home the Moon Man for best male video.

Think they talked American Idol? Nicki Minaj and "the lovely JLO," as she says, get close for the camera.

Miley Cyrus proudly reveals her date Jesse, a homeless youth from the foundation My Friend's Place, who accepted the video of the year award for "Wrecking Ball" on behalf of the pop star. Later in the night, the two celebrated their victory at In-N-Out Burger.

Orange Is the New Black cast mates and co-presenters Taylor Schilling, Uzo Aduba and Laverne Cox squeeze into a #selfie and prove black is the new black in their matching ensembles.

What a lucky guy! Nick Jonas gets to sit next to not one, but two lovely ladies: girlfriend Olivia Culpo and former Camp Rock costar Demi Lovato. "So much fun with these two!" he writes.

Jennifer Lopez and her "Emotions" cowriter Chris Brown match hair and gown colors. "Look who I found," she writes on Instagram.

Is it a sign? VMA winner Lorde and British up-and-comer Charli XCX are all about the good stuff in their fun photo.

Are we about to see a dance-off? Fun. and Bleachers rocker Jack Antonoff can't believe his luck when he runs into Dance Moms star Maddie Ziegler. "I'm a huge fan," he admits. (Turns out Nina Dobrev is, too!) 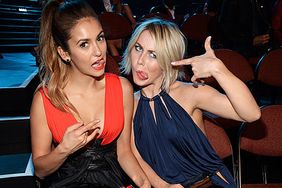 The Good, Bad & Boldest Looks of the Night 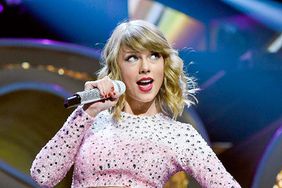