Dress-alike couple Jordin Sparks and her main man Jason Derulo (who is nominated twice for "Talk Dirty") share a not-so-dirty, PG-rated moment at the 2014 MTV Video Music Awards at The Forum in Inglewood, California, on Sunday.

Queen B has arrived! VMA performer Beyoncé and her mega-watt Lorraine Schwartz jewels step onto the red carpet as the crowd barely contains their excitement.

Who needs a limo when you've got a pal? Best male video winner Ed Sheeran celebrates – and gets a piggyback ride to the press room – with director Emil Nava.

Two-time nominee Lorde and five-time nominee Charli XCX buddy up in the audience and show their hopes for the world.

NO BUTS ABOUT IT

Got a good enough look? A shameless Usher takes in the sights – and likes what he sees – when he sneaks a peak at presenter Kim Kardashian's backside while the duo pose separately for photos.

TO HAVE AND TO HOLD

"I touched her! I touched her!" is what we imagine this lucky fan Tweeting after holding hands with the super sexy (and shimmering!) Jennifer Lopez.

Why do those outfits look so familiar? Riff Raff and Katy Perry (who proudly holds her Moon Man for best female video for "Dark Horse") channel Britney Spears and Justin Timberlake's famous all-denim getup, circa 2001. "About to roll thro," posted Perry on Instagram, giving a sneak peak of the look before their arrival.

It's a girls' night out for pals Nina Dobrev (a presenter) and Julianne Hough, who get a little silly at the awards show. "Date night with the ladies!" posted Hough on Instagram.

Has it really been a year since Miley Cyrus's infamous VMA twerking? This time around, a much more tamely dressed Cyrus leans in with pal Snoop Dogg.

She's back! Gwen Stefani makes her first MTV VMA appearance since 2005 and is right back in her element flashing that famous grin on the carpet. "This is a L.A.M.B. Couture. I whipped this one up last night in my closet, sewing away all morning on the 405," she said on the red carpet.

For a busy gal, this is one way to get in some time with Grandma! Ariana Grande (who is nominated three times) gives a sweet smooch to her date – her

Taylor, is that you? Swift, who performed her new song "Shake It Off," shows off her 5'10" frame in one not-typical-Taylor-but-totally-hot baby blue bodysuit as she takes in the scene on Sunday.

Sorry girls, but he's taken! Nick Jonas steps up away from his date, Olivia Culpo, to snap a photo with his lady fans.

That's how you dress up a baby bump! Kelly Rowland (nominated for "Dirty Laundry") rocks sequins galore and shows off that mom-to-be glow.

Hello, friend! The ladies of Fifth Harmony welcome their newest member – a Moon Man! – after winning the coveted statuette for Artist to Watch. 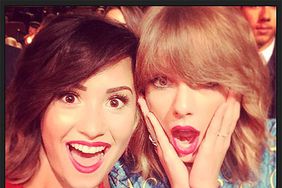