Violet Affleck's Year Around the Playground

From parks to beaches, the 2-year-old enjoyed the sweet life with mom Jennifer Garner and dad Ben Affleck. By Caryn Midler

With her favorite play date – daughter Violet, of course! – Jennifer Garner heads to a Santa Monica park in February. "Having a baby fills your life in such a way that no matter what you're doing, there's something bigger," the mom told PEOPLE in January. "I've just been in heaven being with her the past year."

Never mind the March chill – Garner and Violet (who turned 2 on Dec. 1) keep each other warm while in Vancouver, where the actress was filming the dramedy Juno. Garner tells PEOPLE that having her daughter with her while shooting brings "so much joy to the job."

Three days later, proud pop Ben Affleck drops in to help his leading ladies get into the swing of things. "They're pals," Garner has said of two loves.

It's no secret that Violet loves her daddy! Affleck snuggles up to his favorite girl during a family outing to the Farmers Market in Brentwood, Calif., on April Fools' Day. "Violet prefers him to anyone," Garner told InStyle. "Nothing makes me happier than to see the two of them together and her little hands on his face."

A few days later it's mommy's turn to wrangle the playful girl, as Garner and Violet take their juggling act to a Pacific Palisades park.

Mom and Violet have a blow-out time in Los Angeles a few days before Mother's Day. "I don't want to miss a second with Violet," she told InStyle.

Garner, Affleck and Violet celebrate Father's Day with pal Matt Damon and his family in Hawaii for a three-week getaway.

Continuing their Hawaiian vacation, Garner and Violet have a ball at the shore. "She's pretty awesome," Garner gushed to Marie Claire in September. "We're in that sweet spot before the terrible twos. She sleeps until 7 a.m. Yeah, we lucked out."

In August, Garner enlists the help of her former onscreen dad Victor Garber to wrangle Violet's essentials during a visit in Los Angeles. "That child is so inquisitive and beautiful and so full of life," the former Alias actor told PEOPLE. "I'm obviously prejudiced. But she's an extraordinary kid."

What more could a birthday boy want? Not only does Affleck, who turned 35 on Aug. 15, have his two girls, but he's got a sippy cup to boot, as the family strolls the upscale Brentwood Country Mart.

Affleck enjoys one-on-one time with his daughter during a stop at the Brentwood Country Mart. Violet is "the best thing that ever happened to me," he told Parade magazine. "She has the ability to make me smile and feel so good and be so charmed that, when I'm not with her for a while, all I want to do is go home, just to be around her again."

While in town to star in Broadway's Cyrano de Bergerac in October, Garner and Violet have a mommy-daughter date in a Central Park playground. Even at her opening-night party a week later, Garner was focused on her other role: "You know, I'm a mom," she said. "So I'll be here for about 15 more minutes, and then I'm going home." 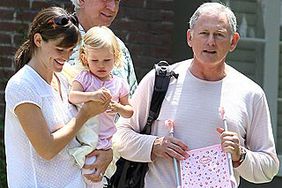 Violet Affleck Talks Up a Storm 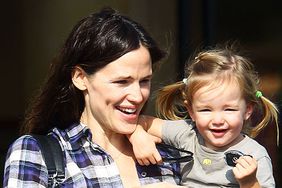 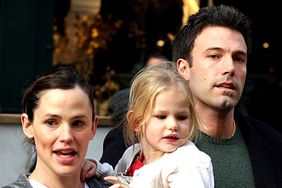 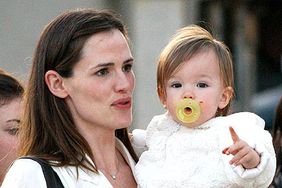