Victoria Beckham: Fashionista of the Year!

It's the power of two: Posh hit the streets of Paris with equally stylish pal Katie Holmes in coordinating black dresses back in January.

Only Beckham would go out for a sushi dinner in London in a full-length leopard coat, plunging top and second-skin leather skirt.

The Beckhams created a buzz with their his-and-hers streaked blond crops at an awards show in London back in March.

Posh continued her frequent-flier style in a '50s-inspired outfit complete with 6-in. YSL "Triomphe" pumps in April.

QUEEN OF THE JUNGLE

She throws like a girl – a Spice Girl! Beckham tossed out the first ball at a L.A. Dodgers game in sporty attire, including Dries Van Noten wedge sneakers.

pumps that seemed more appropriate for Chicago than the

Women of the Year Awards in London.

Talk about spike heels – this Giles Deacon pair is literally

covered in metal spikes! Victoria wore her dangerous footwear, along with a

dress by the British designer, to judge up-and-coming fashion designers

to the L.A. Galaxy in a bright pink Roland Mouret dress and matching

While in N.Y.C for Fashion Week in early September, Beckham executed a

glamorous exit from her hotel in orange Hervé Légér.

with husband David in a green flap-covered Marc Jacobs dress.

Who better to model over-the-top couture? Posh strutted her stuff for a photo shoot in Paris in a feathered getup.

Guess good fashion sense is genetic! Posh and son Cruz were two of a kind in their oversized shades during lunch at Mel's Diner in Los Angeles in October.

fashion statement in her cobalt sheath and matching pumps. 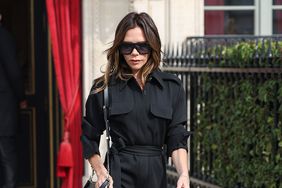 Of Course, Victoria Beckham Made This $890 Shirtdress Look Effortlessly Cool 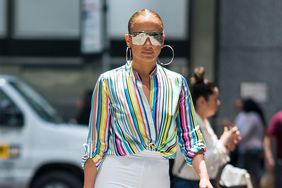 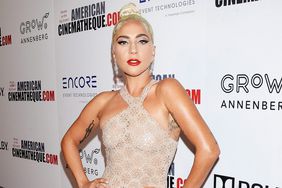