It’s the role that catapulted a newcomer named Audrey Hepburn to international stardom and later served as the centerpiece to one of the most Oscar-laden movie musicals in Hollywood history.

Now, Vanessa Hudgens – exclusively seen here for the first time in character – is stepping into the enviable shoes of French novelist Colette’s irresistible gamine in turn-of-the-20th-century Paris, Gigi, for the splashy stage musical of the same name.

“Excited isn’t a strong enough word!” the actress, who rose to fame as Gabriella Montez on the Disney Channel’s High School Musical, tells PEOPLE about landing the title role in the Broadway-bound adaptation.

“I’ve been waiting for the right role to come along, and she appeared to me when I was least expecting it,” says Hudgens, 25. “It’s been a lot of fun prepping for Gigi allowing myself to be as free as possible. I love this character, the music and play so much.”

The show goes into rehearsal Dec. 8 and will play at the Eisenhower Theater at the John F. Kennedy Center for the Performing Arts in Washington, D.C., from Jan. 16 to Feb. 12, prior to opening on Broadway in 2015 – although already Gigi has had quite a history, ever since her birth in Colette’s 1944 novella.

Adapted in 1951 by Gentlemen Prefer Blondes author Anita Loos, the Broadway stage version starred Colette’s personal pick in the title role, the very young Hepburn – who was then snapped up by Paramount Pictures to play the princess in the movie Roman Holiday, which won her the Best Actress Oscar.

MGM secured the rights to the play, with the hopes of turning it into a movie musical, which it did in 1958, assembled by the top-tier team of director Vincente Minnelli, producer Arthur Freed, lyricist-screenwriter Alan Jay Lerner and composer Frederick Loewe, the last two fresh off their unparalleled Broadway success with My Fair Lady.

Lerner and Loewe then adapted the movie for Broadway in 1973, and while that incarnation could not match the success of its predecessors, the Hudgens version – directed by Eric Schaeffer (Follies, Million Dollar Quartet) from a new book by British playwright and screenwriter Heidi Thomas – will incorporate songs dropped from the movie score.

As for the star, “Making my Broadway debut with Gigi feels like a dream come true,” says Hudgens. “I couldn’t have planned it better myself.” 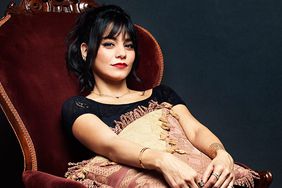 Vanessa Hudgens Talks Zac Efron Relationship: 'I Was Really Mean Because I Was So Fed Up'