Vanessa Hudgens didn’t hold back when it came to putting her adoration for boyfriend Austin Butler on display at the Smoke & Mirrors Party at the Guess Hotel on Saturday in La Quinta, Calif.

“They held hands the entire afternoon,” an onlooker tells PEOPLE of the couple, who were in town for Coachella. “They were extremely lovey-dovey.”

But the smitten stars, who nibbled on vodka-filled snow cones, did take a break from their PDA-fest to munch on chicken and couscous – and grab a handful of complimentary sunglasses.

NEXT: Kristin Cavallari & Jessica Alba Bond Over Motherhood in L.A. 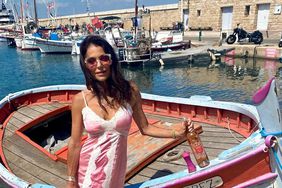