Almost 49 and in bikini-ready shape, the actress takes PEOPLE on a photo tour of her looks through the years. By Elizabeth Leonard

"I was a cute little girl and I wished that I'd believed it then. Maybe because I didn't think I was beautiful inside," says Valerie Bertinelli of this photo, taken in her early teens before she landed a starring role on TV's One Day at a Time in 1975. She had never dieted before joining the show, but costarring with rail-thin Mackenzie Phillips made her feel insecure about her own body. "Then I was like, 'Oh, I'm a fat pig and I need to lose weight.' "

"That's my favorite shot," says Bertinelli, who by then had become a small-screen sensation playing Barbara Cooper on the hit sitcom. "I think I look pretty there. I might be 16, 'cause I wish I was wearing a bra."

"The hair is typical '80s, right? That was for OC magazine," Bertinelli says. "[The outfit] reminded me of the green hot pants my mom made for me when I was 12. That's why I put them on. I think it was right before I got married [to Eddie Van Halen]. I felt pretty good, and then as my marriage started to deteriorate, so did my psyche and my self-esteem. Look how young those legs are. But I have better calf muscles now."

"Look at how sad my eyes look. I'm such a miserable person there. This has been airbrushed because I remember the bones were just scary sticking out. I have a flat tummy. No breasts. Nothing. I just see a sad little girl," Bertinelli recalls. At the time, the actress was doing drugs. "[Back then] I thought, 'Oh my God, look at how thin I am! This is amazing.' But I look back at it and I know how I got thin."

"I loved having to play a nun because I didn’t have to smile in any of these pictures. I also think I look prettier as a nun. I did not have a stylist, as you can see," says Bertinelli of this promotional photo for the TV movie Shattered Vows. "I would always wear big stuff. I was probably around where I am now, within the 125- to 132-pound range. When I got married I was 110, so I felt fat at 125. Stupid. I probably thought I was too heavy."

"That's someone feeling very confident about herself. In fact, I probably got a little arrogant in my twenties," Bertinelli remembers. "I had renewed confidence. Thinking I'm beautiful. Maybe getting a little cocky." But, she says, it was her lifestyle as a rocker's wife that helped fuel a "false" sense of good self-esteem.

"I was trying to get back in shape. I'd opened up an exercise studio with my sister-in-law. And I was feeling pretty good. I remember this is the first time I was able to put on a size 26 pair of jeans and I couldn’t be more thrilled," says Bertinelli. "But there's no definition – that was just not eating. I got a little too thin."

More than a decade later, Bertinelli – who was on TV again, this time for Touched by an Angel – found herself in a different kind of weight struggle. "I was so happy that I could actually tuck a shirt in and put a belt on," she recalls. "Because I was all the way up to 162 or so [before this], I was so happy to get down to 150. This was probably right before Ed [Van Halen] and I separated. I lost a lot of weight and then I gained it right back and went wacko, like, way over."

Bertinelli admits that at the time she liked that this size-12 suit was baggy on her "because then I thought, 'Ooh, I'm thin,' " she recalls. "That was silly. I'd gotten to a point where it was too tight so I felt really good about it until I saw the picture and then I went, 'Nope, still not thin.' "

"This always cracks me up, because when we first started taking the pictures for Jenny Craig, I was like, I don't want to do any 'before' pictures!" says Bertinelli, who had tipped the scales at 172 lbs. when she first started the diet program. "[Fellow company spokeswoman] Kirstie [Alley] was so great. She said, 'Do them! And just be fat. Just enjoy being fat. Go out, eat, have fun.' "

Bertinelli donned a bikini for the first time in 30 years after trimming down to 132 lbs. in nine months while on Jenny Craig and exercising (including walking 10,000 steps a day on her own before hiring a personal trainer in December). "I felt the fear – and I did it anyway!" she says. And the actress is proud of the results of her hard work. "I'm happy. I feel really good for my age. This is just the beginning of the journey." 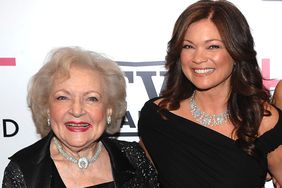