Meet Unlocking the Truth, the Teen Band Who Went from Street Performers to Superstars

"When I was 7, I said, 'When I grow up, I want to be a rock star.' I didn't know it was gonna happen this fast," says Malcolm Brickhouse

A trio of eight-graders from Brooklyn made headlines last summer when they snagged a $1.7 million recording contract with Sony after a video of their heavy metal band Unlocking the Truth performing in Times Square went viral. Their lives took a total 180 ever since.

Malcolm Brickhouse, 14, Alec Atkins, 14, and Jarad Dawkins, 13, have played Coachella and the Warped Tour. They’ve opened for big-leagues acts from Guns N’ Roses to Queens of the Stone Age. They’ve gotten advice from idols like Marilyn Manson (biggest takeaway: “to not listen to what people tell you and it’s okay to be weird”). And now they’ve got a book, Unlocking the Truth: Three Brooklyn Teens on Life, Friendship and Making the Band, based on their lives on shelves now.

But never mind working with industry vets: “The most different thing today in particular is we’re missing school [today] says bassist Atkins. “When we first started, we wouldn’t miss school – we would mainly handle all our band business over the weekend.”

The boys are pretty unfazed by the success, casually looking out PEOPLE’s Midtown Manhattan office window and pointing at a Times Square billboard they’re going to be on, before shifting conversation to more everyday topics – school (they’re studying the Holocaust in school and will have an exam on it down the road); what they do in their spare time (skateboarding and Grand Theft Auto); and girls (“we can’t say names, but ” Atkins says, shying up).

They are, of course, still appreciative of how far they’ve gotten already.

“When I was 7, I said, ‘When I grow up, I want to be a rock star.’ I didn’t know it was gonna happen this fast,” says guitarist and lead vocalist Brickhouse.

As for what’s next, they’re working on new music – and working toward their main goal: to be “as big as Metallica,” says Brickhouse

For more on Unlocking the Truth, pick up the latest issue of PEOPLE, on newsstandsnow 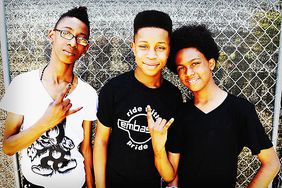