Comic Milton Berle, 91, has sued Out magazine and Century 21 Real Estate for $6 million. Variety reports that the lawsuit stems from a Century 21 ad in the magazine which used an unauthorized photo of Uncle Miltie from his ’50s TV show dressed up as Carmen Miranda. The copy under the picture read: “Our team of friendly professionals know how to cater to royalty . . . after all, every queen deserves a castle.” Berle’s attorney, David Pierce, claims that “a generation of Americans unfamiliar with his classic schtick are seeing Uncle Miltie depicted as a homosexual . . . Mr. Television deserves far better.”

A Comic Elder Finds That Aging Can Have Its Amusements

How to Bury a Millionaire 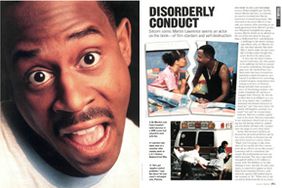