Uma Thurman has never been one to feel too settled in one place, which is why her transatlantic romance with Arpad Busson suits her just fine.

“Before I had kids, I was even worse. I would constantly move,” the actress, 37, tells Harper’s Bazaar in its January issue. “I’ve made huge strides for the sake of my dear children so they’re not subject to adolescent homelessness from me.”

Thurman spends most of her time in New York with her two kids by ex-husband Ethan Hawke – Maya, 9, and Roan, 5 – but she also jets twice a month to London, where her financier beau lives.

The arrangement may be typical for Thurman, though it has its downsides. “My house is always a disaster,” she admits with a sigh.

Thurman, who stars in three upcoming movies – My Zinc Bed, In Bloom, and The Accidental Husband – became involved with Busson (supermodel Elle Macpherson’s ex) after her on-and-off, three-year relationship with hotelier Andre Balazs ended in March.

On the subject of exes, Thurman is philosophical. “Look, my aim is true,” she says. “I wish everybody no ill. I don’t really participate in any mudslinging or such. I like people to see their lives blossom and not go poorly for them.”

She’s also taking the long view when it comes to being a 37-year-old actress in a business dominated by younger starlets.

But she remains guardedly hopeful, despite the anxieties inherent in growing older. “Life is change; physicality changes,” she says. “It’s transient, and that’s a beautiful and a painful thing. When I look into the mirror, I think, What have I really done? Not much, if you really want to know. What do I need to do to do more?” 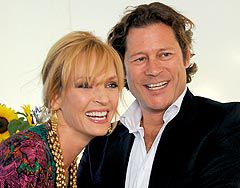 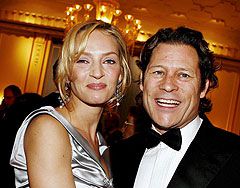 Fiancé: More to Uma Thurman Than a Pretty Face 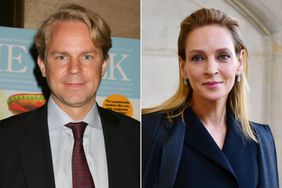 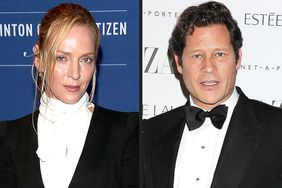