Here's Your Punchline: The Internet Reacts to Solange and Jay Z's Elevator Fight

Netizens are ready to rumble

If you didn’t know the name Solange Knowles before, you do now. Beyoncé‘s little sister is making headlines for apparently attacking Jay Z in an elevator at a Met Gala afterparty in New York City.

On Monday, TMZ released security footage of the fight, which shows Solange attempting to kick and punch the rapper while Bey tries to stay out of the fray. Once off the elevator, 27-year-old Solange left the event in the same car as her sister. Meanwhile, Jay Z was escorted to a different vehicle.

While reps for the stars have yet to offer a response, Solange has continued to Tweet since the incident and appears perfectly content.

Of course, the Internet waits for no rep, and social media is rapidly churning out responses to the attack. Since the news broke, #Solange, #WhatJayZSaidToSolange and #JayZSolange have bounced around Twitter’s trends list. Fellow performers are weighing in on the scuffle, too. Rapper 50 Cent posted a self-dubbed version of the brawl to Instagram (NSFW).

While we hold out for official answers regarding the weirdest elevator ride to come out of the Met Gala, here our are favorite web reactions to Solange’s serious high kick: //storify.com/peoplemag/reactions-to-solange-and-jay-z-elevator-fight.js?header=none 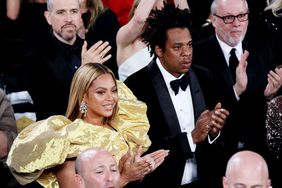