When the Trump Taj Mahal opened on April 2, 1990, it was the twelfth and largest casino in Atlantic City. It cost $8 billion to build and was touted as the “Eighth Wonder of the World.” Twenty-six years later, it’s closing down, amid a labor strike, massive financial losses and its namesake’s run for the presidency.

Wednesday, the casino announced that it will shut down after Labor Day. Carl Icahn, Donald Trump‘s friend and the casino’s owner, has said that he’s lost nearly $100 million on the casino in the past year and a half during a labor strike. The casino’s closing will result in the loss of 3,000 jobs. The casino is obligated to provide 60-day warning notices to employees, so the soonest it can shut down is early October.

“It was a bad bet,” Icahn told the Associated Press. “How much good money do you throw after bad?”

Related: Could Donald Trump Drop Out?

Workers of the Local 54 chapter of the Unite-HERE union have been on strike against the Taj Mahal since July 1. Thursday, their campaign became the longest-running in Atlantic City, surpassing a 34-day walkout orchestrated against seven casinos in 2004. Trump Taj Mahal’s closing brings the number of Atlantic City casinos down to seven, while the 3,000 jobs eliminated are added to the tally of 8,000 jobs lost since four other AC casinos closed in 2014.

In November, AC’s future may get even grimmer, as voters decide whether to grant permits to two casinos in northern New Jersey, outside of New York City, which would further siphon visitors (and the attendant cash flow) away from Atlantic City.

Trump once owned three casinos in Atlantic City, but his stake in the city was mostly lost by 2009, when he resigned ownership of Trump Entertainment Resorts to bondholders in a bankruptcy settlement. He retained a 10 percent stake for the use of his name, which was eventually eliminated in bankruptcy court when Icahn took over in March of this year.

The Trump campaign has sought to downplay Trump’s involvement in the casino’s failure. Spokeswoman Hope Hicks told the AP that, “Mr. Trump made a tremendous amount of money in Atlantic City during its prime. He has not been involved for seven years, with many people giving him great credit for his timing and success.”

Union workers are striking over health insurance and pension befits that a bankruptcy court approved in October 2014 for the casino’s previous owners. Icahn offered to restore health insurance to the Taj Mahal’s workers, though the benefits were reportedly less those offered by the city’s other seven casinos, and consequently, the offer was rejected by the union.

“The great deal-maker would rather burn the Trump Taj Mahal down just so he can control the ashes,” Union president Bob McDevitt told the AP, referring to Icahn. “In the end he’ll have to live with what he’s done to working people in Atlantic City.”

Icahn told the AP, “What is my obligation? I give hundreds of millions to charity, but this is a business; it’s not a charity. They look at this as my responsibility, and I’m a bad guy if I don’t give them what they want.” 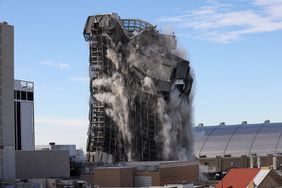 Trump's Former Atlantic City Casino Gets Blown Up: 'As You Heard the Dynamite Go Off, It Sent Chills' 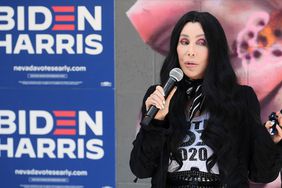