Shanian, 39, is seeking spousal support from Spelling, 32, according to the divorce papers, filed Thursday in Los Angeles Superior Court and obtained by PEOPLE. He also asked that Spelling be blocked from asking for spousal support, and that she pay for his attorney fees.

Shanian’s lawyer and Spelling’s reps could not immediately be reached for comment.

Since August, the actress has been living apart from Shanian, a writer-actor she met in Los Angeles in 2002 when she starred in the play he co-wrote (Maybe Baby, It’s You). The pair were married July 3, 2004.

Last month, Spelling told PEOPLE she was “disappointed” by the split and hoped to sit down with her estranged husband to “talk about all this in detail.”

“I went into the marriage with the best intentions, hopes and dreams,” she said. “I feel that I’ve really disappointed people. I’ve disappointed everyone who came to my wedding. I’m disappointed in myself.”

Shanian previously declined to comment about the breakup. But according to a source close to Spelling, by the beginning of August, when she was in Ottawa to film the TV movie Mind over Murder, she and Shanian were “living separate lives.”

Away on the set for three weeks, “She realized the relationship was not right for her,” says her friend. She also realized was developing feelings for costar Dean McDermott.

The actor, who according to a source was also in a “marriage that was not working,” was equally drawn to Spelling, and the two became romantically involved. “It just happened,” says Spelling’s friend. “No one meant any harm to anyone. You can’t help who you fall in love with and who you’re right with.”

Meanwhile, McDermott’s estranged wife, Mary Jo Eustace, spoke out about their own divorce, telling PEOPLE their breakup was “humiliating beyond anything I’ve ever known.”

“Right now my family and I are just trying to move through this nightmare one day at a time, with the hope of maintaining some dignity and resolve,” she said. 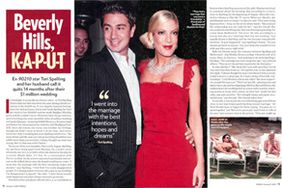