Tony Romo showed a bit of post-split wear and tear over the weekend.

Could the breakup be affecting the quarterback’s game?

Romo insists he’s working hard to stay focused. “The more stuff you’ve got in your mind, probably the less successful you’re going to be,” he told PEOPLE. “So the only thing I think about is the task at hand. When you let your mind wander or think about other things, you’re setting yourself up for failure. So I just try to stay focused. I’ve done a pretty good job of that this week.”

But one friend begs to differ, telling PEOPLE the pro-athlete is “emotionally drained” in a week that included his public split and the tournament.

Despite his emotional week, Romo still had fun and let off steam, say friends. “He’s got real good game,” said Rhoden, who noted Romo “got a little wild off the tee on some shots, which cost him.” Still, “he’s a good guy. He’s a guy that s fun to be around and play with.”

Both Friday and Saturday, girls lined the 17th and 18th holes waving handmade signs for the football player, one even yelling, “We don’t like that Barbie either!” Romo showed no reaction to that statement.

The tournament capped off a 6-day stay in Tahoe for Romo that included a little gambling and some partying with friends and, yes, girls. “He went out to the lake with a few friends and some girls. They were all drinking and partying on a boat for a couple hours,” says one source.

Meanwhile, Simpson was to make an appearance at a party for pal Christina Milian on Saturday night but was a no-show. A source close to the singer says she’s at home with family and friends taking it easy.

“Jess is okay there have been easier days and harder days. Even though she knows this is the right thing, breakups are always hard.” 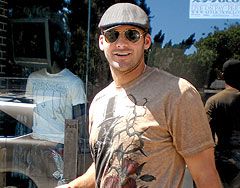