“Tom and Katie walked in before the show started and the crowd went crazy. Tom waved to the crowd and signed numerous autographs,” a source tells PEOPLE.

When Dion came out onstage, the couple stood with the crowd to give her several standing ovations, and in turn, the singer said she was both excited and nervous to have Cruise and Holmes in the audience, according to the source.

After the two-and-a-half hour show, the couple went to meet personally with Dion.

The show wrapped up a two-day stay in Sin City for the couple, who arrived Thursday and stayed at the Wynn Las Vegas.

Less than a week after dining at the SW Steakhouse at the Wynn with David and Victoria Beckham, Cruise and Holmes arrived holding hands for a romantic dinner on Friday at the same place. They feasted on Kobe beef, crab claws, French fries and diet soda, and were “very lovey dovey,” according to one diner.

On Thursday night, the couple dined at the Hard Rock Hotel’s Nobu just after 10 p.m. As they walked through the hotel on their way to the restaurant, “Tom and Katie were really friendly and said hello to every guest who approached them,” said an observer. 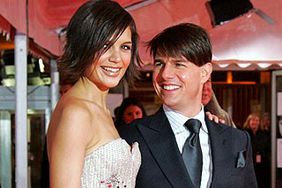