Tom Brady Makes It to Football Practice After Car Crash

Tom Brady isn’t going to let a car crash keep him away from football.

The New England Patriots quarterback is doing just fine after an early morning two-car accident in Boston on Thursday, and he showed up on time for practice at Gillette Stadium in Foxborough, Mass.

While he didn’t make it into the locker room, he did participate in the team walkthrough, in a helmet and pads. According to Patriots offensive lineman Stephen Neal, Brady was out there “calling everything.”

“I saw him, I asked him if he was okay,” Patriots linebacker Tully Banta-Cain told the Boston Globe. “He said, ‘I’m fine.’ “

While Brady, who is married to Brazilian supermodel Gisele Bündchen, was unharmed, the passenger in the van his car collided with was unconscious after the accident, had to be removed with the “Jaws of Life” and was transported to an area hospital, police said.

Patriots center Dan Koppen said the team is thinking of everyone involved.

“It’s kind of crazy, unfortunately, but I think he’s all right,” Koppen said. “Hopefully, everybody came out of it okay. It’s one of those things where, you just never want anything like that to happen to anybody.”

Meanwhile, Brady’s agent Don Yee said in a statement that the athlete was thinking of everyone involved in the accident.

“I want to thank the safety personnel for their service, and express our concern and support for the well-being of the occupants of the other vehicle,” he said in a statement. 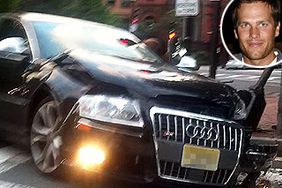