Watch: The Internet Is Having a Field Day with Tom Brady's Dance Moves Right Now

Fittingly, Brady danced to the Migos song "Handsome and Wealthy"

Though Tom Brady will be sitting out the first four games of the 2015 NFL season, he still has many things to be happy about. His wife, for instance. The fact that New Jersey Governor Chris Christie thinks he has an “almost too perfect” life, for another.

And people are fascinated.

“Tom Brady Dances Like a 5-Year-Old When Migos Plays,” Deadspin announced. This is also funny, because Tom Brady is not 5 years old.

“Tom Brady Dancing to Trap Queen Is the Greatest Thing Ever,” Buzzfeed proclaimed. Buzzfeed has previously declared Jason Statham‘s baby picture, a baguette vending machine, and reverse GIFs as “the greatest thing(s) ever.”

“The Tom Brady Dancing Video Is The Realest Thing You Will See All Day,” said Grantland. We trust Grantland because it is a site that writes about sports.

Not since Robyn decided to dance on her own or Left Shark decided to just do Left Shark has a person’s dancing made national news this way.

Congrats, Tom Brady. You did it, buddy. 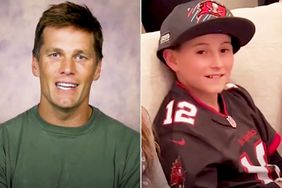