Being a working mom and comedian isn't always funny, the 30 Rock star admits

“Any time you talk about being a working mother and you complain about it in any way, people eat your face,” Fey tells InStyle for its April issue, on sale Friday. “I remember reading some interview where Gwyneth Paltrow said something like, ‘I missed my kids on the set one day and I was crying.’ And I thought, Yeah, I’ve totally done that.”

Continues Fey, 40: “But on the Web site where I read it there were these furious comments. ‘But you’re a movie star!’ Yes, it’s much worse for a mom serving in Afghanistan. Of course. But there’s just no forgiveness.”

Exercising her formidable talents is still a stretch, given the time constraints in a day. Yet, as Fey admits, “You need a lot of help, and you need not to be afraid to ask for help.” She credits a great nanny and husband (since 2001) Jeff Richmond, musician and 30 Rock co-producer, who is also “a full participant” at home.

Fey, on the promotional trail for her new memoir, Bossypants (“I thought for a minute about calling the book Having It All: Love, Work, Jaw Pain,” she says), is able to flex her muscle as 30 Rock boss by occasionally bringing her daughter, Alice, to the set.

There, the 5-year-old likes to play with actor Jack McBrayer, says her mom, who adds: “She’s also figured out that it’s funny to show people your butt.”

Which leads to the obvious question. Asked if she’d like more kids, Fey responds to interviewer Henry Alford, “If you’re asking me to do that with you, I cannot.”

• FROM INSTYLE.COM: More From Tina’s Interview

• FROM INSTYLE.COM: See how Tina’s look has changed over the years 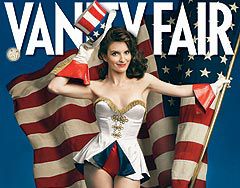