Britney Spears‘s hospitalization late Thursday night came after a chaotic day that involved her late arrival for the deposition in her custody case. Here’s a rundown:

• Spears shows up 90 minutes late at the offices of Kevin Federline‘s lawyer for the rescheduled deposition in their custody battle. The session lasts less than 15 minutes, with attorneys only having time to go over the ground rules, a source says.

• Britney returns to her Beverly Hills home, and sons Preston, 2, and Jayden, 1, are dropped off for visitation with their mom. The pop star spends the afternoon with her boys.

• Federline’s bodyguard shows up to pick up the boys and return with them to Kevin’s Tarzana home.

Ambulances and fire trucks arrive, as news and police helicopters hover over Spears’s neighborhood. Several neighbors flee the chaotic scene. Spears is strapped to a gurney and placed in one of the ambulances. (PHOTOS: Britney in the ambulance.)

• Britney, seen smiling and laughing in the ambulance and covered by a grey blanket, is taken from her house. Police cars escort the ambulance as it drives, sirens blaring, through the Beverly Hills community. Spears appears alert during the trip to Cedars-Sinai Medical Center, even giving the middle finger to photographers during the 20-minute drive.

Jayden rides in separate ambulance to the hospital with the monitor; Spears’s son Preston is later taken to Federline’s house in a separate car.

• Spears pal Lutfi leaves the hospital. Britney is in 72-hour mental lockdown. Also known as a “5150 Hold,” it is, according to the medical code, “When any person, as a result of mental disorder, is a danger to others, or to himself or herself, or gravely disabled.” The “mobile crisis team” is able to make this recommendation in writing and take a patient be evaluated and treated.

• Federline takes Jayden back to his Tarzana home. 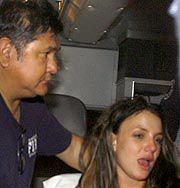 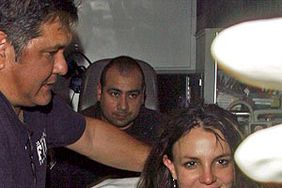