The former husband and wife are spotted together at a Jupiter, Fla., youth sports event

Tiger Woods and Elin Nordegren, having finalized their divorce in August 2010, haven’t been seen in each other’s company for ages – but that changed on Saturday, according to TMZ.com.

The website – showing a photo of Woods, Nordegren and their son Charlie on the baseball diamond, with the youngster holding a baseball glove – reports that the parents were both in Jupiter, Fla., for a local youth sports event.

The golfer showed up first, with Charlie and his sister, Sam. Nordegren followed an hour later.

A member of Woods’s crew told PEOPLE Sunday: “He’s not getting back with Elin. That’s never going to happen. They are co-parenting the children. Like any other mature adults, they have set aside their differences and are striving to be the best parents they can possibly be.”

Their reunion was described as cordial, though after an hour they reportedly left in her car in order to escape attention.

Since the bitter breakup of their "irretrievably broken" marriage, Woods, 37, has been seen with Lindsey Vonn, while Nordegren, 33, broke up a year ago with businessman Jamie Dingman.

The source added: “As of a few days ago, he was still seeing Lindsey Vonn. That hasn’t changed. And everyone is mature enough to know that Tiger and Elin will always be a part of each others’ lives, because the kids need them both.” 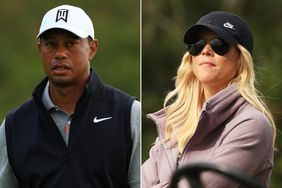