Tiger Woods, 24, won the 100th U.S. Open golf championship at Pebble Beach, Calif., on Sunday by a record 15 strokes. His overall score of 272 tied the record for the Open (also held by Jack Nicklaus and Lee Janzen), and he was the first player ever to finish at 12 under par. On Friday, however, he teed off a few people when he let loose with a string of expletives after he hit a shot into the rocks along the Pacific Ocean on the 18th hole. One of his words started with an F — it wasn’t “fore” — and his outburst was picked up by the live TV microphone. “That makes my commentary seem mild,” said NBC sportscaster Johnny Miller. Woods later apologized. “I’m pretty intense, and I let it slip out,” he said on NBC. “I regret that it happened.” Woods now has his sights set on the British Open, which begins July 20 in St. Andrews, Scotland. 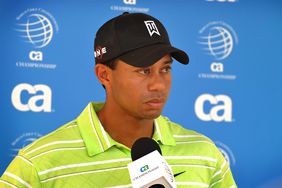