'This Is Us' Star Susan Kelechi Watson Gets Emotional About Costar Mandy Moore: 'She's Really Touched My Heart'

Susan Kelechi Watson can’t stop gushing about her This Is Us costars — and for good reason!

In a sit-down interview with PEOPLE Now on Tuesday, the NBC actress, who stars as Beth Pearson on the drama, opened up about working with two of her fellow cast mates: Ron Cephas Jones (William Hill) and Mandy Moore (Rebecca Pearson).

Last week, audiences were in for an emotional episode when Beth’s father-in-law, William, passed away. Although it was her character that had to say goodbye to William, Watson admitted that she, too, felt a personal loss because of his death.

“It was hard for me. I try to keep my characters and myself as separate as possible, but in this case, the parallel was — working with Ron Cephas Jones, who has just been one of the great joys of my career, to work with and he’s not going to be there,” Watson told PEOPLE. “That was sort of me going through that journey as well.”

In addition to Jones, Watson also has high admiration for the show’s leading lady, who plays her on-screen mother-in-law.

“I didn’t know her before this, but she’s such a great person,” she continued.

“And then — I’m sorry, I love her a lot,” Watson said, taking a pause and fighting back tears. “No, she’s really touched my heart because I didn’t know her before this and she’s just so lovely and so easy and so open. And then, as an actress, I mean, Mandy’s doing things on this show I bet people are like, For real? … That’s not to say anything against her, but this has given her the opportunity to live in the fullness of what she has to bring and there’s nothing like watching that.”

Immediately following the Feb. 22 episode, Sterling K. Brown — who plays William’s on-screen son, Randall Pearson on the series — was left weeping and hosted a 12-minute Facebook Live to answer questions and comments from followers, and was overcome with emotion while reflecting back on the death of his on-screen father.

“If you have family that you haven’t talked to in a while or friends that you feel that you have gotten out of touch with, then call them up. And let ‘em know how much you love them and how much you care because tomorrow is not promised,” Brown said as he wiped away tears from his eyes. 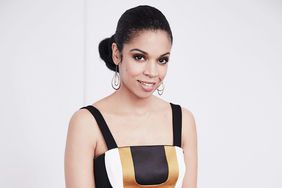 Susan Kelechi Watson 'Proud' of 'This Is Us' : 'The Way That [The Show] Portrays Black Men Has Been So Touching'

'This Is Us' '' ' Sterling K. Brown Sheds Tears in Emotional Facebook Live After THAT Episode: 'Tomorrow Is Not Promised'