The Rock Can Hurt

Howard Stern, move over. The new King of All Media is looking to be World Wrestling Federation star The Rock. Not only is his nine-week-old memoir safely occupying a perch on The New York Times’s bestseller list (it was No. 2 yesterday), but the wrestler, 27, hosted “Saturday Night Live” over the weekend. And there’s more. The Rock, whose real name is Dwayne Johnson, is finalizing his deal with Universal Pictures to play the villain in the upcoming “The Mummy 2,” to be released in May of 2001, reports Variety. “The Mummy 2,” to be written and directed by Stephen Sommers, who also did the original, will reteam actors Brendan Fraser and Rachel Weisz. The Rock will play their worthy adversary: a half-man, half-scorpion character who is brought back from the dead, says Variety. Beware his sting. 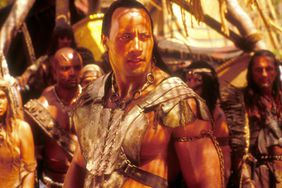