The Muppets: Comeback of the Year!

From TV to fashion, the Muppets took back Hollywood in 2009 with appearances at stars' sides – and on their clothes!

HOW I MET YOUR MUPPET

During an appearance on Late Night with Jimmy Fallon in March, How I Met Your Mother star Jason Segel – currently penning the newest Muppets movie – was roasted by balcony-dwelling hecklers Statler and Waldorf. "What, was Charo busy?" Statler (right) joked of Segel's appearance.

Lady Gaga wore her love for Kermit the Frog on her sleeve – and all over her body!– when she taped a German interview in July in a getup made of bedazzled Kermie dolls. Far from being a one-Muppet woman, the costume-loving popster showed her love for all things furry in a poufy skirt resembling The Muppet Show drummer Animal.

The featured star of Macy's charity event Glamorama, fashion maven Miss Piggy visited Marc Jacobs's showroom in August seeking a couture gown. "It's elegant, whimsical, daring," she said of the leopard-and-pink number Jacobs designed for her. "[Marc] knows that fashion is all about style and substance – and moi has plenty of both."

Sesame Street – which celebrated its 40th anniversary in November – was presented with the Lifetime Achievement Award at the Daytime Emmys on Aug. 30, giving Cookie Monster (left, with Abby Cadabby and "handlers" David Rudman and Rollie Krewson) a taste of a trophy: "Wow, that taste even better than Latin Grammy!" he said after biting off a piece.

Bringing their act to the big stage, the Muppets' first couple performed a duet of "Don't Go Breaking My Heart" during the semifinals of America's Got Talent in September.

Proving she'd rather kiss the frog than the prince, unabashed admirer Lady Gaga brought Kermit the Frog to the MTV Video Music Awards on Sept. 13. "She is a very good kisser, but it was not a romantic kiss," Kermit said, assuring PEOPLE he was still with Miss Piggy. As for her outfit, the famous frog said, "I was just happy it wasn't made from anyone I recognized."

Dancing with the Stars hoofers Aaron Carter and Karina Smirnoff kicked off their Week 2 quick step with a bang – surprise performer Animal at the drum set! Dancing to The Muppet Show theme, the duo scored a 27 from the judges, and a vote of approval from special guest Gonzo.

Alongside Desperate Housewives stars Teri Hatcher and James Denton, the Muppets appeared in spots promoting Disney's "Give a Day, Get a Disney Day" promotion, an initiative that rewards volunteer work with a one-day ticket to Disney theme parks.

P IS FOR PIGGY

If imitation is the sincerest form of flattery, then consider Katy Perry a Lady Gaga fan. The quirky dresser followed in Gaga's footsteps and donned a Muppet-print dress for Jean Charles Castelbajac's October Fashion Week show in Paris.

GET ME A MUPPET, STAT!

Paging Dr. Elmo! The beloved red Muppet, Oscar the Grouch and Grover invaded the daydreams of Dr. J.D. Dorian (Zach Braff) on Scrubs in January, helping the doc and his coworkers navigate a hectic day at Sacred Heart Hospital by following the mantra WWMD – What Would the Muppets Do?

To mark the November release of Queen's greatest-hits album, the Muppets filmed their own version of the band's iconic video, incorporating the musical stylings of more than 40 Muppets, including Gonzo (and his chickens), Animal, Dr. Teeth and the Electric Mayhem, Miss Piggy – and even Beaker (me-me-me-me)!

Now, that's the life! Preparing for the Muppets' return to Dancing with the Stars, Miss Piggy received some TLC from (shirtless!) pro Maksim Chmerkovskiy before the show. While Piggy got massaged, Animal performed a drum solo and Statler and Waldorf weighed in on the judging as the Muppets helped crown Donny Osmond and partner Kym Johnson season nine champs in the show's November finale. 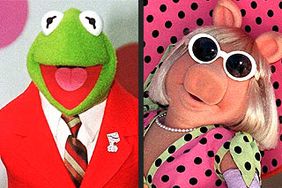 Kermit the Frog & Miss Piggy to Perform on 'America's Got Talent' 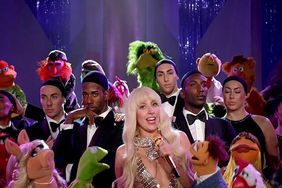 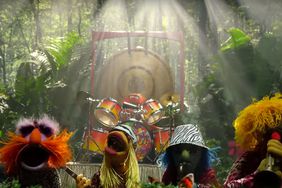 The Muppets Covering 'Jungle Boogie' Just Might Make Your Day 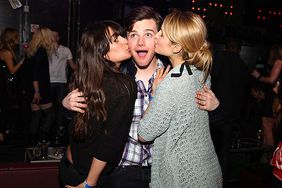 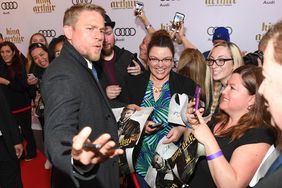 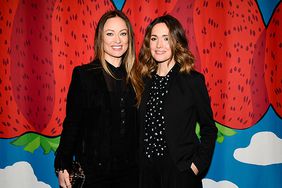