The Donald for President

He may have come in second to Ross Perot in a recent Reform Party poll, but supporters of a Donald Trump presidential bid still think he’s got a chance, reports the New York Post. Trump-boosters have launched thedonald2000.org, a website dedicated to “urging Trump to make the race.” The organizers say they’re seeking a million on-line signatures to persuade the tycoon to run. “My God!” says a spokesperson for The Donald. “They’re really serious!” The rep says Trump is “honored by all the hoopla, but having too much fun building great buildings.” 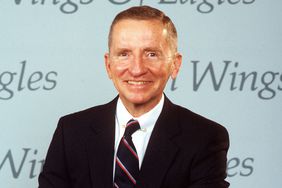 Ross Perot, the Billionaire Who Upended the 1992 Presidential Race, Dies at 89: 'A Man of Action'