Texas Mom Outraged After 7-Year-Old Receives Henna Tattoos at School: 'Tattooing Another Culture's Expressions on My Daughter Is Not Acceptable'

A Texas mother is expressing outrage this week after her 7-year-old daughter returned from school with Henna dye on the backs of her hands, because of the body art’s connection to the Hindu and Muslim religions.

For Seabrook resident Tammy Samour, this year’s Christmas has been sullied by the presence of Henna art on her daughter Leah’s hands, reports KHOU.

“We tried to get it off and it didn t budge,” Samour told the Texas news station.

“It’s upsetting to go through Christmas with another religion’s celebratory symbolism all over my daughter’s hands,” she added.

Leah’s hands were decorated during a multicultural event staged at her school, Ed White Elementary in Houston, according to the report.

Samour admitted to KHOU she “didn’t know” what Henna was before Leah arrived home, displaying the temporary tattoos for her. The mom did some research and was not happy with her Google results.

“Exploring other cultures is a wonderful thing,” Samour told KHOU. “But tattooing another culture’s expressions on my daughter is not acceptable.”

With time, the ink will wear off. In the meantime, Leah’s school has offered to use Photoshop to clean up her hands in the Samour family s impending Christmas pictures.

The school, according to KHOU, issued a statement to parents concerning the multicultural event that did mention the use of Henna without explaining what it is. 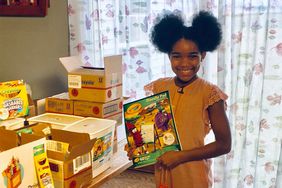