Ted Allen Shares Details of His Engagement to Barry Rice

Ted Allen and fiancé Barry Rice aren’t the only ones feeling joyous over their engagement.

The host of Food Network’s Chopped, 48, says positive acknowledgments of his same-sex partnership have been pouring in since the couple of 20 years decided to get engaged just after the Defense of Marriage Act (DOMA) was deemed unconstitutional on Wednesday.

“I announced it online, and have had hundreds of responses, virtually 100 percent supportive – incredibly exciting,” Allen told PEOPLE in a statement Thursday. “A great, great day for our country.”

Of the decision to finally take their courtship to the next level, Allen says, “We have been elated with every state that went for marriage equality, including our home state of New York. But we’ve also felt for a long time that we weren’t that interested in getting married until we could get the real deal – the same rights, the same protections, the same status and privileges as straight couples at the federal level.”

Adds the TV personality, “[We wanted] Social Security survivor rights, estate rights, the right to visit one another in a hospital room – in a word, you know, equality.”

Allen initially popped the question, but says after some coffee talk, Rice asked Allen in return.

“Not all that dramatic, coming from a couple that had already notched two decades,” Allen says. “But it means soooo much to us and to millions of LGBT Americans – And, I should note, their children, who have seen the legitimacy of their parents’ relationship demeaned for so many years.” 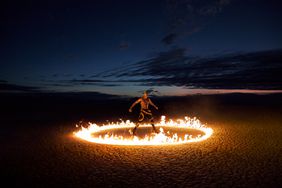