She's on a boat! Taylor Swift cruised the canals of Italy during the European leg of her Speak Now world tour, which saw her play 17 shows in 15 countries. But the 21-year-old told PEOPLE the best part of her visit actually brought out her inner power walker. "I loved walking around Venice," she said.

During a trip to the BBC Radio 1 studios in London, the country crooner was left star-struck by some very famous faces. "Here I am geeking out next to a picture of the Beatles," she said. Perhaps the boy band proved a good luck charm – during Swift's return to the British capital, she surpassed 20 million albums sold.

"When we first got to Belgium after a 14-hour flight, the first thing we did was go exploring," Swift said of one of her and her bandmates's favorite activities. "Brussels is famous for its excellent chocolate, so we posed with this statue of a chocolate elephant."

Say cheese! The singing sensation snapped photos with some lucky fans outside of the arena where she performed in Singapore. "I love [my fans] so much and will never forget the magic of the Asian tour," she said.

After going jogging in a nearby Parisian park, Swift and her fiddle player Caitlin took a moment to drink in the view. "We joke that we look like the junior high gym class versions of ourselves in this picture," she said, "but to tell you the truth, it was one of the best afternoons I can remember."

The gang's all here! The singer joined her bandmates for this group photo in front of Neuschwanstein Castle in Germany. "It's a beautiful castle that I've wanted to see ever since I did a report on it in 4th grade," said Swift, who's up for four Academy of Country Music Awards at Sunday's ceremony.

Striking her signature pose, the single lady put her love of castles on display. "There's something so romantic and fascinating about them," she said.

Look who just got photobombed! "Me. Amos my bass player. A glorious castle," said an unbothered Swift.

See more of Taylor's pics from around the globe in PEOPLE, on newsstands now! 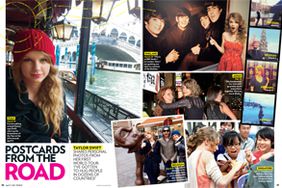 Postcards from the Road