Ask Taylor Swift for one word to describe her life these days and the answer is easy: “Happy,” she says. “It feels like this ongoing dream.”

And why shouldn’t it? Swift – who graces the cover of PEOPLE’s 25 Most Intriguing People of 2009 – has lots to celebrate: In the past 12 months, she has seen her CD, Fearless, become the year’s best-selling album, sold out tour dates and racked up a slew of accolades including the Country Music Association’s Entertainer of the Year award and eight Grammy nominations.

“You can stay the same person, even if everything around you changes,” says the golden girl, 20, of the trappings of her fame. “I would like to think everybody out there isn’t just waiting for me to trip and fall and stumble out of a club drunk.”

“People know I’m not a party girl,” she says. “I’m not hiding some dying urge to be out clubbing right now.” 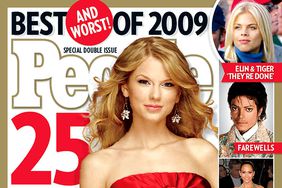