The pair were "really sweet" on their Brooklyn coffee date

Families across the country spent their Thanksgiving evenings tuning into Taylor Swift‘s NBC special Taylor Swift: Speak Now. But where was the starlet spending her Turkey Day?

In Brooklyn, alongside new boyfriend Jake Gyllenhaal. Around 10:30 a.m., the pair popped into Park Slope’s Gorilla Coffee for specialty maple lattes, made with pure Vermont syrup.

“They were really sweet, really really sweet,” says a source at the shop, adding that the duo also tipped well.

“They get treated like normal people around here,” says the source, noting that Gyllenhaal, 29, deals with the occasional star-struck customer politely.

The actor’s sister Maggie Gyllenhaal lives near the crowded neighborhood shop – which boasts loud music and an energetic staff – and frequently stops in.

The source says that this was Swift’s first time in the shop. Being introduced to favorite family haunts? Sounds like the singer-songwriter, 20, is being welcomed right into the Gyllenhaal family lifestyle – one maple latte at a time. 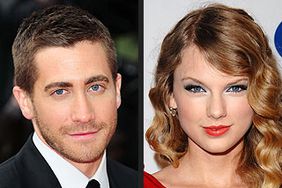