Ford’s career spanned five decades and several genres, from romances and crime dramas to comedies and westerns. Besides the 1946 Gilda, his most memorable roles were in 1953’s The Big Heat, 1955’s The Blackboard Jungle, 1963’s The Courtship of Eddie’s Father, 1965’s The Rounders and 1978’s Superman, in which he played Jonathan Kent, the adoptive father of Clark Kent (Christopher Reeve).

“It comes to mind instantly what a remarkable actor he was,” Sidney Poitier, Ford’s co-star in The Blackboard Jungle, told the Associated Press on Wednesday. “He had those magical qualities that are intangible but are quite impactful on the screen. He was a movie star.”

Born Gwyllyn Samuel Newton Ford in Quebec, Canada, Ford moved to Southern California with his family when he was eight. A 1930s career in West Coast theater led to his being signed to a 14-year contract by the imperious Columbia Pictures boss, Harry Cohn.

Still, Ford told PEOPLE in 1989 that his biggest break came in 1945, while he was having lunch in the Warner Bros. commissary.

“Bette (Davis) asked me to sit at her table,” he recalled. “She looked at me and said, ‘Well, maybe you’re too young.’ Then she said, ‘A week from Sunday you are to come to the studio, and wear a tweed coat and smoke a pipe.’ She said to a friend, ‘That will make him look older,’ and then told me, ‘I want to make a test with you.’ I did the film – A Stolen Life (1946) – and from that came Gilda.”

Ford, who was married four times, is survived by his 61-year-old son, Peter, whose mother was actress Eleanor Powell, Ford’s wife from 1943 to 1960.

Glenn Ford Popped the Question at Windsor Castle, and He and Cynthia Became a Royal We 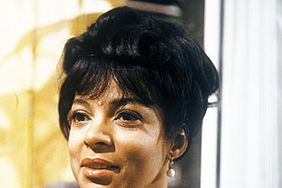