Stars Walk on the Wild Side

Nicole's koala! Kellie's serpent! Paris's hyena! Check out the animals stars are hanging out with on Twitter! (Psst: Someone makes friends with a white tiger cub!)

Uh-oh, look out, Joel Madden – your fiancée has her eye on a new friend! "I think I'm in love," Richie Tweeted while Down Under in Sydney.

While at the Kuala Lumpur Bird Park in Malaysia, the lifestyle guru and her two traveling pals, landscape artist Memrie Mosler Lewis (left) and niece Sophie Martha Herbert, posed for the "family portrait with birds of all sorts." It was a success, Tweeted Stewart. .

Meanwhile, wife Moore is no stranger to the wilder side of the animal kingdom herself! The actress made a new giraffe pal while shooting a cover for Harper's Bazaar, even feeding her tall pal "right from my hand. Such an awesome experience," she Tweeted.

While at the James Hunter Wildlife Rescue Clinic in Burbank, Calif., the Glee bad boy showed his soft spot for the animals, sharing this shot of a small – and somewhat aggravated! – poorwill bird.

"I swear... it was love at first sight," Tweeted the Sunny with a Chance star about her new feathered friend, adding, "I was SO close to taking it home with me."

Don't be fooled by this snuggly shot! "This was right before the cub bit my shoulder," Tweeted the singer, who visited a local wildlife park while in South Africa for the World Cup.

The heiress also visited South Africa for the World Cup – and had this close encounter, Tweeting that the wild hyenas "are cute."

"My first hefalump sighting!" the singer Tweeted about this elephant spied on safari in Africa. "Safari is something I've always wanted to do," the mom-to-be wrote.

Not all housepets are furry! Richards adopted two Uromastyx lizards for daughters Sam and Lola and showed off a shot of the lady lizard, Victoria, on Twitter. (The boy lizard's name is Zach.)

While in Florida to work with Habitat for Humanity, the Bachelor winner – and bitter ex of Jake Pavelka – visited the Serengeti Plain animal attraction at Busch Gardens, getting up close and personal with a giraffe.

Also at Busch Gardens: the In the Heights star, who met Jeremy the lemur – and filmed a wildlife preservation PSA with her family.

Is Shaq taller than a giraffe? Maybe! While feeding the animals during a visit to Busch Gardens with his family, the basketball star got very close to one of them. "He kissed [me] aaaaaagh," O'Neal Tweeted.

"Just overcame my fear of sharks by kissing a killer whale," joked the reality star while puckering up for this shot. 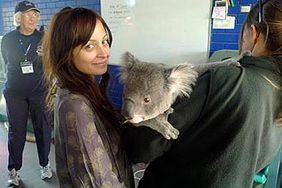 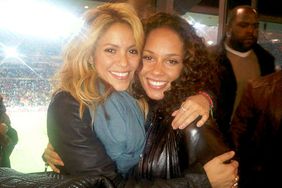 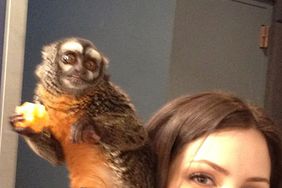