Talk-show host Ellen DeGeneres stops by the Late Show with David Letterman studios in N.Y.C. to deliver a Top 10 list for Tuesday's show.

Jessica Simpson gets a hug of approval from boyfriend Eric Johnson Tuesday at the unveiling of her new denim line in New York, where sister Ashlee served as a model and brother-in-law Pete Wentz deejayed for the crowd.

Katie Holmes and Tom Cruise only have eyes for each other Tuesday at The Cinema Society with PEOPLE StyleWatch screening of The Romantics in New York. The film, which costars Anna Paquin and Josh Duhamel, opens Sept. 10.

Gisele Bündchen takes to the runway Tuesday for Fashion's Night Out: The Show at New York's Lincoln Center.

Fulfilling her role as a U.N. goodwill ambassador Tuesday, Angelina Jolie speaks to refugees displaced by the floods in Pakistan.

Showing off her penchant for skintight dresses, Katy Perry gives an interview – and manages to keep her balance! – on the set of the Italian X Factor with host Francesco Facchinetti in Milan Tuesday.

And she's off! Jennifer Garner keeps her hands full with daughters Seraphina, 18 months, and Violet, 4, running errands around Santa Monica, Calif., on Tuesday.

Is she gearing up for Fashion Week? Victoria Beckham, who was just nominated for a British Fashion Award, struts her stuff at London's Heathrow Airport Tuesday.

Ben Affleck cruises into promotional mode, touring the canals while in Italy to premiere The Town – a film in which he directs and stars – Tuesday at the Venice Film Festival.

After watching pal Roger Federer advance at the U.S. Open alongside his dad, a chic Gwen Stefani keeps it in the family, hanging with his wife Mirka (not pictured) Tuesday in N.Y.C.

Spotted: Katie Holmes looking glam outside the Late Show with David Letterman Tuesday in New York. The actress is busy promoting her latest film, The Romantics, in theaters Sept. 10.

A color-coordinated Justin Timberlake putts around the Callaway Room at his eco-friendly Mirimichi Golf Course in Millington, Tenn., Monday – just before the grand reopening. 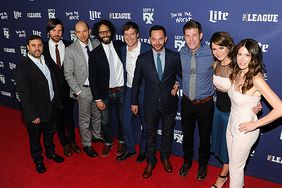