By Karen Mizoguchi
Trending Videos
01 of 86

Renée Zellweger looks like the movie star she is in an all-blue ensemble and chic cat-eye sunglasses on Tuesday in New York City.

Brie Larson and George Clooney ride horses while filming a commercial in Navalcarnero, Spain, on Wednesday.

Brad Pitt smiles and listens attentively during a roundtable discussion during the Breitling Summit on Tuesday in L.A.

Justin Timberlake gears up for the Alfred Dunhill Links Championship by getting in a few practice shots on Tuesday at The Old Course in St. Andrews, Scotland.

Jonathan Van Ness opens up to host Hoda Kotb about his decision to reveal he’s HIV-positive on Tuesday’s episode of Today in N.Y.C.

Keanu Reeves cheers on sister Karina Miller at the premiere of her film Semper Fi on Tuesday in Los Angeles.

Jennifer Lawrence dons an all-black ensemble with gold accessories outside the Dior Paris Fashion Week show on Tuesday in France.

Ice-T steps out in costume on the set of Law and Order: Special Victims Unit on Tuesday in N.Y.C.

Christie Brinkley and Mario Lopez show off their casts on the set of Access Daily on Tuesday in Universal City, California.

Freida Pinto and Rachel Lindsay chat at the unveiling of the Kendra Scott Women’s Entrepreneurial Leadership Institute at The University of Texas-Austin on Tuesday.

Olivia Palermo steps out in a tartan dress and thigh-high boots during Paris Fashion Week on Wednesday in France.

Bella Hadid and Jorja Smith strike a pose at the Dior Beauty dinner with Peter Philips at Caviar Kaspia in Paris on Tuesday.

Brie and Nikki Bella head to dinner at Joan’s on Third in L.A. on Wednesday.

Melinda and Bill Gates attend The Goalkeepers 2019 Global Goals Awards, hosted by their eponymous foundation, at Jazz at Lincoln Center in N.Y.C. on Tuesday night.

Terrence Howard is joined by fiancée Mira Pak and kids Qirin Love and Hero Howard at the actor's Walk of Fame ceremony in Hollywood on Tuesday.

Also at the Saint Laurent show, held at the foot of the Eiffel Tower: Rami Malek.

Finn Wittrock and Amanda Seyfried share a kiss on Tuesday while shooting scenes for their new movie in Brooklyn, New York.

Bella Hadid enjoys a moment backstage at the Missoni show during Milan Fashion Week in Italy on Saturday.

Cooking Up a Good Time

Queer Eye's Antoni Porowski attends a signing event for his book Antoni in the Kitchen at Barnes & Noble at The Grove in Los Angeles on Saturday.

Elizabeth Olsen and Shailene Woodley step into the sunlight at the Salvatore Ferragamo show during Milan Fashion Week in Italy on Saturday.

Swaggy Wolfdog and Camila Cabello bond at the 2019 iHeartRadio Music Festival at T-Mobile Arena in Las Vegas on Friday.

Yalitza Aparicio holds flowers and a stuffed animal after the Gender Equity Forum, which was organized by Tec de Monterrey, in Mexico City, Mexico, on Friday.

As she continues to recover from the illness that kept her off the air part of this week, Kelly Ripa goes for a walk with husband Mark Consuelos in N.Y.C. on Friday.

Jennifer Lopez wears an updated version of her iconic Grammys dress to close out the Versace runway show on Friday during Milan Fashion Week in Italy.

Also at the Versace show on Friday, Rosie Huntington-Whiteley.

A low-key Ryan Reynolds makes his way through New York City on Friday.

Cedric the Entertainer visits BuzzFeed's AM to DM on Friday in N.Y.C.

Sofia Richie attends the “A Ride Through the Ages”: Wrangler Capsule Collection Launch at Fred Segal Sunset in L.A. on Thursday.

Maria Menounos and Bachelor in Paradise's Hannah Godwin show their denim at a dinner to celebrate the launch of Kensie's "#Make Pretty Powerful" campaign featuring Godwin at Stella 34 Trattoria inside Macy's Herald Square in N.Y.C. on Thursday.

Spike Lee and Tonya Lewis Lee hit the yellow carpet at the Cincoro Tequila launch at CATCH Steak in N.Y.C. on Wednesday night.

Too Cool for School

Zendaya teams up with Yoobi to donate school supplies to 450 students at her hometown elementary school in Oakland, California, on Thursday. 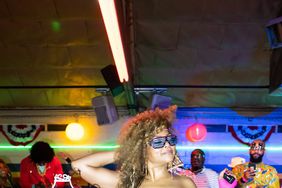 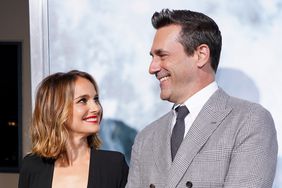 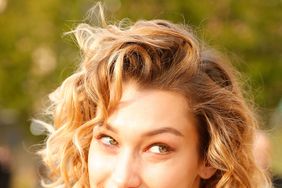 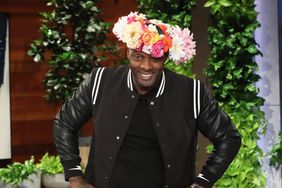 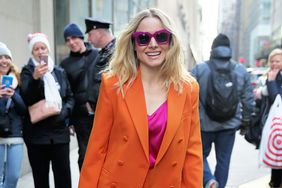 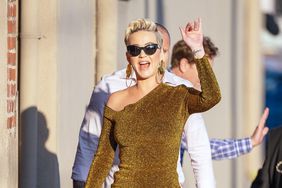 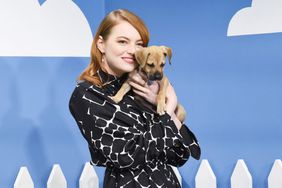