Heidi Montag and Spencer Pratt chow down for a charitable cause Tuesday at a Los Angeles-area Taco Bell. There to raise awareness for World Hunger Relief Week, The Hills star shared another juicy scoop: Her Web site had been hacked.

A day after getting booked on misdemeanor driving charges Britney Spears ditches her wig to hit her favorite Malibu Starbucks for a decadent frappuccino on Tuesday.

Now back in Los Angeles, Lindsay Lohan engages in some well-scripted behavior Tuesday – a shopping trip at Diavolina on Robertson Boulevard – while toting around the script for her latest project, Dare to Love Me.

Marcia Cross steals a friendly moment with Kristen Bell during the Tuesday opening of the Elie Tahari boutique at Saks Fifth Avenue in Beverly Hills. But an eager Cross was ready to check out the clothes inside, asking PEOPLE, "Can we shop tonight?" Teased the new mom: "I don't get out of the house anymore so if we couldn't shop tonight, we'd go at nap time tomorrow."

While beau Djimon Hounsou captures the moment, Kimora Lee Simmons giddy-ups with her girls Aoki Lee, 5, and Ming, 7, Wednesday during the "Got Chocolate Milk?" event at Mr. Bones Pumpkin Patch in West Hollywood.

Are David Hasselhoff and Jackass star Steve-O into fashion? All signs point to "yes" as the two arrive at Smashbox Studios Tuesday in Culver City, Calif., to take in the runway shows during Los Angeles's Mercedes-Benz Fashion Week.

Richard Simmons strikes a dazzling pose outside The Late Show's New York studio on Tuesday. During the course of a (jokingly?) tense interview, host David Letterman repeatedly teased the exercise guru about his skimpy outfit.

A costumed Tori Spelling and Dean McDermott travel back in time – to the roaring '20s! – as they film scenes Tuesday for an episode titled "Murder Mystery" for their Oxygen series, Tori and Dean: Inn Love.

Ricky Martin lays low to celebrate receiving his star on the Hollywood Walk of Fame Tuesday. "This is an incredible moment," Martin told the crowd of (mostly female) fans. "Everything I do, I do with love and passion."

Kylie Minogue, who told recently that her body isn't what it once was after fighting cancer, shows off her sparkle Tuesday at the London premiere of her documentary White Diamond.

Proud Bostonian Ben Affleck throws his support behind local hospital workers Tuesday in their campaign to achieve free and fair union elections during a news conference at City Hall.

After getting cozy with her Woody Allen costar Javier Bardem, Penélope Cruz and her look-alike sister Monica arrive at Japan's Narita International Airport on Tuesday for a fashion event.

Mariah Carey, who admitted that bleak diets help her stay trim, keeps her newly svelte figure on display as she exits Ago restaurant in Los Angeles Monday.

OUT OF HIS ELEMENT?

Jesse James, who lost a bet with The Tonight Show intern Ross Matthews, finds himself front and center (and enjoying himself?) at the Heatherette spring 2008 fashion show at Smashbox Studios Monday night in Los Angeles. 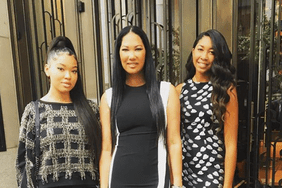