The twosome step out for a party in L.A. Plus: Emma Stone, Mila Kunis and more

After hosting Saturday Night Live over the weekend, Emma Stone goes glam for the Museum of Modern Art's Film Benefit Tuesday, where director Pedro Almédovar was honored in New York.

Also at the Pedro Almédovar event: Elizabeth Olsen, who makes one sexy film buff as she makes her way into the Museum of Modern Art in N.Y.C. on Tuesday.

Mila Kunis gets up close and personal with the new Jaguar convertible during a sneak preview party in Beverly Hills on Tuesday.

What a kiss up! George Clooney flaunts his lady love Stacy Keibler at another red carpet event – this time at the Beverly Hills premiere of the actor's film, The Descendants, on Tuesday.

He's not a purr-vert – Antonio Banderas is just getting frisky with his onscreen feline counterpart while promoting his animated flick, Puss in Boots, in Mexico on Tuesday.

Model mom Heidi Klum leads the way for her kids – daughter Leni, 7, and sons Johan, 4, and Henry, 6 – while running errands in L.A. Tuesday.

Joseph Gordon-Levitt hits the red carpet alongside 50/50 costar – and mom-to-be – Bryce Dallas Howard Tuesday during the When You Find Me premiere at New York's American Museum of Natural History.

Amid whispers of a split, Pippa Middleton maintains a stiff upper lip Tuesday while arriving to work in London.

Lady Gaga plays the blues Tuesday, stepping out in a vibrant ensemble for a day of shopping in London's Notting Hill neighborhood.

It's in the eyes! Following his claim that he'll quit acting in three years, Brad Pitt promotes his baseball film Moneyball at a Tuesday press conference in South Korea. 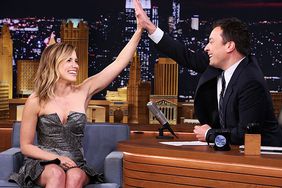