Taylor Swift lights up the stage in a sparkling mini Tuesday while performing at Milan's Mediolanum Forum as part of her Speak Now world tour.

Kourtney Kardashian and 14-month-old Mason step out for a little mommy-and-me time in Beverly Hills, Calif., on Tuesday.

Pucker up! Christina Aguilera blows kisses to reporters Tuesday while attending a press conference for NBC's The Voice in L.A. The singer will serve as a coach on the musical competition series, set to debut April 26.

Holy slit! Proud mom Celine Dion returns to the stage at Caesars Palace in a dramatic thigh-popping dress Tuesday during the opening night of her Las Vegas show.

Now he's just teasing us! Kellan Lutz (who just turned 26) gets undressed at a security checkpoint while preparing for takeoff at Los Angeles International Airport on Tuesday.

Ryan Seacrest takes a backseat to girlfriend Julianne Hough's King Charles spaniel Lexi as the two take the pooch out for a stroll in New York on Tuesday.

Mary-Kate Olsen keeps warm with a furry headpiece and oversized scarf Tuesday while heading out in New York City.

Who's got Bieber fever now? The teen star buddies up to his look-alike during his wax figure unveiling at Madame Tussauds in London on Tuesday.

A radiant Mandy Moore gets busy spreading some L-O-V-E Tuesday in Toronto at the launch of the Virgin Mobile Love Button, a Facebook app that lets you "love" something when "like"-ing just isn't enough.

Katie Holmes looks well heeled strolling through Manhattan after a day of photo shoots for her clothing line, Holmes amp Yang, on Tuesday.

After stepping out for a festive costume party over the weekend, it's back to business for Vanessa Minnillo, who teams up with March of Dimes and Bayer to launch the Girlfriends for Folate campaign in New York on Tuesday. 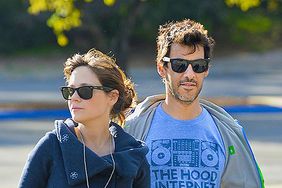