JOINED AT THE SIP

Ashlee Simpson may have a new guy in her life, but her main man remains to be 2-year-old son Bronx, who cools down with a smoothie in Los Angeles on Tuesday.

Ditching the suit for street wear, Robert Pattinson dresses down while continuing to shoot his new movie, Cosmopolis, in Toronto, Canada Tuesday.

MORE THAN MEETS THE EYE

Shia LaBeouf and Tyrese Gibson make a coordinated style statement on the red carpet Tuesday at the New York premiere of Transformers: Dark of the Moon.

RUNNING OF THE BRIDES

Kristin Cavallari continues to get her body into tip-top bridal form Tuesday in Chicago, where she'll be marrying NFL beau Jay Cutler next spring.

He must approve! Ricky Martin gives fans a big thumbs up while performing at Madrid's Palacio de los Deportes on Tuesday.

Mom-to-be Alyssa Milano flaunts her baby belly in casual style while out and about in L.A. on Tuesday.

Ashley Olsen's pooch gets carried away on Tuesday as the duo head out for an errand run in N.Y.C.

She sure cleans up nice! Pippa Middleton is chic and ready to hit the town Tuesday in London.

Jake Gyllenhaal, who recently enjoyed a friendly night out with Olivia Wilde, goes solo for a coffee run Tuesday in L.A.

Alicia Keys makes a point on Tuesday while debuting a new look – and greeting her wax figure – at Madame Tussauds in New York.

After celebrating her upcoming arrival with a bash at the beach, mom-to-be January Jones keeps it moving Tuesday in Los Feliz, Calif.

Scott Speedman leads the way during an afternoon stroll with I Am Number Four star Teresa Palmer Tuesday in New York City. 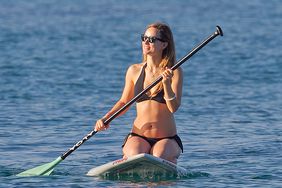