Jeremy Piven throws out the ceremonial first pitch at a Chicago Cubs and Cincinnati Reds game on Tuesday in Chicago.

HER WORK IS DONE

Rebel Wilson smiles as she leaves London's Phoenix Theatre following her performance in the show Guys and Dolls.

Mike and Dave Need Wedding Dates stars Adam DeVine and Zac Efron have some fun on the red carpet at the Sydney, Australia premiere of their new film on Wednesday.

Hello, beautiful! The always-ageless Sharon Stone sports a chic-casual look while out shopping in West Hollywood on Tuesday.

Café Society's Parker Poset takes a stroll through N.Y.C. with her dog on Tuesday.

Olivia Palermo dons head-to-toe black as she steps out for Haute Couture Fashion Week in Paris, France, on Tuesday.

Nick Offerman records a new audiobook version of The Adventures of Tom Sawyer for Audible over the Fourth of July weekend.

Liv Tyler proves she's a sporty mom on Tuesday as she walks through N.Y.C. in workout gear.

Liev Shreiber and Jon Voight stay in character on Tuesday as they film scenes for Ray Donovan in L.A.

Kate Hudson does rocker chick so well as she arrives in Rome, Italy, on Wednesday.

Who knew Jourdan Dunn was a biker chick? The model leaves the Alexandre Vauthier Couture show in style during Paris Fashion Week.

Julia Stiles talks about her role in the upcoming film Jason Bourne at N.Y.C.'s AOL Studios for its Build Speaker Series on Tuesday.

Where's Fergie? The singer's other half, actor Josh Duhamel, keeps it casual on Tuesday as he arrives for a flight at LAX Airport.

Jamie Chung looks ready to roll on Tuesday as she films scenes for Gotham in N.Y.C.

Cressida Bonas and Princess Eugenie hug at a private viewing of the London art exhibition Radical Presence on Tuesday.

Adele reaches out to fans during a performance in St. Paul, Minnesota, on Tuesday.

Prince Harry makes some new friends on Monday at the Wigan Youth Zone, a facility offering sports, arts, and creative activities for children, in Wigan, England.

Margot Robbie is a vision in metallic at the London premiere of The Legend of Tarzan on Tuesday.

Game of Thrones star Sophie Turner has her hands full as she walks through London on Tuesday.

Justin Bieber rides the waves on a wakeboard in Miami on Tuesday.

Cate Blanchett stuns in a stenciled jumpsuit at the Giorgio Armani fashion show in Paris on Tuesday.

Bella Hadid commands the catwalk on Tuesday at the Alexandre Vauthier show during Paris Fashion Week.

The Legend of Tarzan's Alexander Skarsgard takes the lead as Djimon Hounsou and Christoph Waltz hide behind the titular star at the film's London premiere on Tuesday.

Rihanna is the center of attention while performing at Stockholm, Sweden's Tele2 Arena on Monday.

Chrissy Teigen, John Legend and Emily Ratajkowski ring in the Fourth of July at Chrissy's Cookout at the Revolve Hampton House in Long Island, New York.

Will Smith, daughter Willow and Jessica Chastain strike all the right poses in Paris on Tuesday at the Chanel Haute Couture Fall/Winter 2016-2017 show.

Sienna Miller steps out on Tuesday for day nine of the 2016 Wimbledon Championships in London.

Paula Patton dons a white lace dress while attending the "Red, White and Bootsy" event in honor of Fourth of July on Monday in Malibu, California.

Also at the "Red, White and Bootsy" event: Paris Jackson and boyfriend Michael Snoddy, who wore white shirts and jeans.

Adriana Lima is ever-sleek in a cleavage-baring black dress at a dinner party hosted by Ralph amp Russo and Chopard in celebration of Paris Fashion Week on Monday.

Tori Spelling and daughter Hattie have themselves some family fun at House of Shroom by Mellow Mushroom Booth at the KIA Beach House over the Fourth of July weekend.

Glee alum Amber Riley and Smokey Robinson pose for a photo together backstage at A Capitol Fourth concert on Monday in Washington, D.C.

President Barack Obama hugs his daughter Malia (who turned 18 on Monday), after singing "Happy Birthday" to her at the Fourth of July White House party, where singer Janelle Monée (far right) and Kendrick Lamar (left) cheered them on.

Brody Jenner plants a smooch on fiancée Kaitlynn Carter's cheek at the "Red, White and Bootsy" event on Monday.

BABY, YOU'RE A FIREWORK

Demi Lovato belts out a stunning performance at the Boston Pops Fireworks Spectacular on Monday.

Hailey Baldwin makes a bold statement about marriage on Monday as she hangs out with friends in Beverly Hills, California.

Hayden Panettiere thumbs through a book as she walks through N.Y.C. on Monday.

Jesse Eisenberg talks Now You See Me 2 on the Lorraine show in London on Tuesday.

Kourtney Kardashian wows in a black one-piece while at the beach in Miami, Florida on Monday.

HAVING A GOOD TIME

Niall Horan is all smiles as he attends day seven of the Wimbledon Tennis Championships in London on Monday.

THE KING IS BACK

He did it! Joey "Jaws" Chestnut takes top honor at Nathan's Hot Dog Eating Contest, where he broke a record with 70 hot dogs in 10 minutes, in Coney Island, New York on Monday.

James Corden and wife Julia Carey squeeze in a light workout while in London on Monday.

Fresh off her music video cameo in Fergie's "M.I.L.F.$.," Ciara shows off her svelte physique in an all-white ensemble at Sunday's Essence Festival.

FOR THE LOVE OF MUSIC

Queen Latifah and Jada Pinkett Smith take the stage at the 2016 Essence Music Festival on Sunday in New Orleans, Louisiana.

A dapper Pierce Brosnan is the epitome of cool as he heads into a dinner party at L.A. hot spot Nobu with son Dylan on Sunday.

Nicole Richie is spotted on her cellphone after a workout at a Studio City, California gym on Sunday.

A fresh-faced Miley Cyrus sports what appears to be her engagement ring while in L.A. with Liam Hemsworth (not pictured).

Mel B and husband Stephen Belafonte are all smiles while on vacation in Ibiza, Spain on Saturday.

Selfie expression! Matt Damon snaps a photo with fans at the Jason Bourne film premiere in Australia on Sunday.

The Legend of Tarzan's Alexander Skarsgard and Margot Robbie attend a photocall for their new film on Monday in London.

Solange Knowles and Kelly Rowland come together at the 2016 Essence Music Festival on Sunday in New Orleans, Louisiana to present the first-ever Inspiring Leadership Award to Tina Knowles Lawson.

Bill Clinton, Hillary Clinton and Lin-Manuel Miranda pose for a photo backstage at Broadway's Hamilton on Saturday in N.Y.C.

Charlotte McKinney, who stars in the upcoming film Baywatch, rings in the Fourth of July weekend on the beach in Malibu, California on Saturday.

Bradley Cooper and model-girlfriend Irina Shayk have themselves a PDA-packed day as they take a stroll through Paris, France on Saturday.

Amber Riley and Jordin Sparks celebrate the 2016 Essence Festival by stopping by the My Black Is Beautiful booth on Sunday.

Beyoncé took her Formation World Tour across the pond, performing at Wembley stadium in London on Saturday night

To SCOTLAND WITH LOVE

The Queen attended Sunday church services with Prince Philip at Canongate Kirk in Edinburgh after urging calm as Scotland considers leaving the U.K. over Brexit

Jennifer Garner, in Paris for the start of Paris Fashion Week, was seen in the fashionable Marais district shopping for flowers before heading out for ice cream with friends 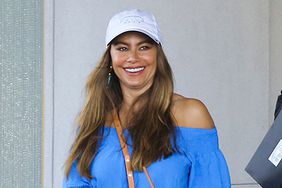 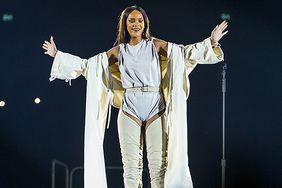