Julia Roberts and Danny Moder take Manhattan on Sunday, strolling down Fifth Avenue on their way to dinner (a nanny was watching 9-month-old twins Hazel and Phinnaeus). Good thing Roberts likes the city: In March, she'll start a three-month run in Broadway's Three Days of Rain.

Skeleton Key star Kate Hudson visits the Late Show with David Letterman on Monday, where she revealed son Ryder's newest learned word: The 19-month-old has "tattoo" etched on the brain since touring with pop Chris Robinson's band, the Black Crowes.

Four Brothers star Andre Benjamin goofs around with Lindsay Lohan at the movie's New York City premiere on Tuesday. So what brought Lohan out? Just your average invitation: "I was just sitting around all day with my mom, (and) this was something to do."

Also at the Four Brothers premiere: star Mark Wahlberg and his main squeeze, model Rhea Durham. The couple have a daughter, Ella Rae, who turns 2 next month.

Carmen Electra lightens up on a Los Angeles set, reportedly donning a blonde wig and leopard-print bikini to spoof Naomi Watts in the upcoming remake of King Kong while filming a new comedy by the Scary Movie team.

Ben Affleck shows his support for best friend Matt Damon on Monday at the afterparty for the L.A. premiere of Damon's movie, The Brothers Grimm. The Boston-bred pals shared a screenwriting Oscar for 1997's Good Will Hunting.

At Monday's premiere, Damon's Brothers Grimm costar, Heath Ledger, brought his pregnant girlfriend, Michelle Williams – who sported a sparkler on her ring finger. Does that mean Ledger's ready to be a husband? "I wouldn't rule it out," he said.

Sarah Jessica Parker and Matthew McConaughey leave their significant others at home (her husband Matthew Broderick; his girlfriend Penelope Cruz) as the actors board a yacht in a Maryland marina recently to film a scene for their romantic comedy Failure to Launch.

Nicolas Cage and his wife of one year, Alice Kim – with baby on board – go for a boat ride in Vancouver on Sunday. The actor is north of the border filming the Neil LaBute thriller The Wicker Man.

American Idol winner Fantasia takes daughter Zion for a spin on the teacup ride at Walt Disney World in Lake Buena Vista, Fla., on Monday. The RampB singer held a fourth-birthday party for her little princess at the theme park. 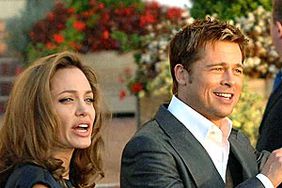