Though she's deflected engagement rumors, Lindsay Lohan gives a peek at what she might look like as a blushing bride, positively shimmering in a white Marchesa gown at the world premiere screening of Bobby at the Venice Film Festival on Tuesday.

Earlier that day, Lohan and beau Harry Morton leave their Cipriani Hotel in Venice. At a press conference, Lohan avoided the topic of her relationship but still showed some love, saying the city was "beautiful and romantic."

Lohan shares a momento romantico with Morton, who also just spent a weekend for two with the actress in Hawaii.

Also in Venice: new mom Rachel Weisz, who gave birth to son Henry just three months ago. And while she glowed at the world premiere of The Fountain on Monday, her director husband Darren Aronofsky didn't fare so well – critics panned the flick.

Hollywoodland star Adrien Brody checks out lay of the land in Venice Saturday with his girlfriend, Spanish actress Elsa Pataky.

Here's one for the family album! Seal and Heidi Klum – with children Henry, 11 months, and Leni, 2 – double their star power and take a walk of fame in lower Manhattan Monday with Gwen Stefani, Gavin Rossdale and their son, Kingston, 3 months.

Dapper mama's boy Colin Farrell shows mom Rita a night on the town Friday in Dublin, escorting her to dinner.

Costars Sandra Bullock and Keanu Reeves stop in Tokyo on Monday, where their mystical romance The Lake House premiered.

Prize couple Mischa Barton and boyfriend Cisco Adler hit a winning streak Monday at a Malibu fair, picking up a couple of new friends – who can keep her real pets Charlie and Ziggy company.

Jessica Simspon is coming across loud and clear after suffering from bruised vocal cords last week. The A Public Affair singer belted it Monday on CBS's The Early Show (left), then on Tuesday helped welcome Rosie O'Donnell to The View.

Labor Day is meant for lounging, and a bikini-clad Eva Longoria takes her duties seriously Monday at a Hollywood pool.

Has marriage softened rock-and-roll rebel Kid Rock? On Friday, the singer, who married Pamela Anderson a few times this summer, swaps his usual accessories – his guitar and his beer – for a grocery cart in Malibu.

How is Beyoncé celebrating her 25th birthday? By working harder than ever. The singer touched down in Tokyo on Saturday to promote her newly released album B'Day, but will be back in New York City to stop by Good Morning America, TRL and The View this week. 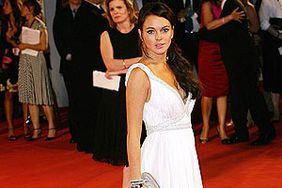