The smiley singer brings a pop of color to a dark London night. Plus: Reese Witherspoon, Benedict Cumberbatch & more!

All dressed up with someplace to go! Kim Kardashian and husband Kanye West have the look of love Tuesday night as they arrive together to the GQ Men of the Year Awards in London.

Newlywed Adam Levine feels the love from fans on Monday during a performance on Today in New York City.

Heidi Klum gets goofy with pal Mary-Kate Olsen on Monday night as the two take in the tennis action with their beaus (not pictured) at the U.S. Open in Queens, New York.

There's no rest for this girl! Reese Witherspoon hits the pavement on Labor Day for a jog around Brentwood, California, following a Friday appearance at the Telluride Film Festival.

Rihanna takes a friend off-roading in a quad during a visit to Corsica, France, on Monday.

Girls actor Adam Driver suits up for a photo call for his new drama Hungry Hearts at the Venice Film Festival on Sunday in Italy.

Amanda Seyfried heads out with her pup Finn for a walk in Hollywood on Monday.

An effusive Cuba Gooding Jr. shows off his American pride on Labor Day while enjoying the sand and surf in Malibu, California.

Victoria Beckham is made in shades as she arrives at New York's JFK Airport on Monday ahead of New York Fashion Week.

Benedict Cumberbatch pauses for a pose with Dan Stevens at a London screening of Stevens's new thriller The Guest on Monday.

Someone is happy to see mom! After some time in Australia, Lady Gaga arrives in Chicago, where she was greeted by her dog Asia and a handler at O'Hare International Airport on Monday. "Asia surprised me at the airport!" she posted on Instagram. "Happy Times."

Elsa Pataky leaves her little ones at home to run errands on Monday in Malibu, California.

Taye Diggs snaps a #selfie with new girlfriend Amanza Smith on Monday night while in the Moët amp Chandon suite at the U.S. Open Tennis Championships in New York City.

Looking statuesque in her long black gown, Uma Thurman stands out Monday night during the premiere of Nymphomaniac: Volume 2 – Directors Cut at the Venice Film Festival in Italy.

With just a few weeks to go until his debut on The Voice, Pharrell Williams enjoys a little afternoon shopping in London on Monday.

Following their Saturday nuptials, newlyweds Gabrielle Union and Dwyane Wade make their way through Miami International Airport on Sunday to jet off to their honeymoon.

PUT A LID ON IT

America's Got Talent judge Heidi Klum keeps it all in the family while picking up groceries with her parents at Whole Foods in Beverly Hills on Sunday.

Gwen's not the only one with a toned tummy – just look at the six-pack hubby Gavin Rossdale shows off Sunday at a Malibu, California, beach.

Superblonde former Glee star Dianna Agron flaunts her new do while shopping with a pal in Venice, California, over the weekend.

NEW BRIDE ON THE BLOCK

They do! Glamorous Jenny McCarthy is a vision in white Sunday as she weds Donnie Wahlberg in St. Charles, Illinois. The couple exchanged vows before guests including McCarthy's fellow former The View cohost Sherri Shepherd and Wahlberg's NKOTB band mates.

After being spotted together at the Teen Choice Awards, rumored couple Chloë Grace Moretz and Brooklyn Beckham step out together again on Sunday at the American Eagle Outfitters Celebrates the Budweiser Made in America Music Festival in Los Angeles.

Also at the Made in America Music Festival on Sunday: a very lucky Khloé Kardashian, who is seen making her way backstage.

Meanwhile at Sunday's Made in America Music Festival, a leather-clad Rita Ora does her thing on the Marilyn Stage. "MIA thank you," she later posted on Instagram.

It Guy Adam Driver takes time out of his busy schedule on Sunday to promote his new film Hungry Hearts at the Venice Film Festival in Italy.

Actor Jason Statham and supermodel Rosie Huntington-Whiteley are the very picture of summer as they enjoy a day out together Sunday at the Malibu Country Mart.

Animal lover Kaley Cuoco saddles up for a show-jumping competition at a Saturday horse show in Simi Valley, California.

President Obama, First Lady Michelle Obama and their daughters Sasha (top) and Malia arrive in White Plains, New York, for the wedding of White House chef Sam Kass on Saturday. And it was an evening to remember: The family partied the night away, and according to the White House press pool report, they returned home at 2:52 a.m., two hours and 37 minutes behind schedule.

Always fashionable Gwen Stefani embraces a simple kind of life in a T-shirt and jeans as she leaves an acupuncture clinic in L.A. on Friday.

Owen Wilson signs autographs for fans at the premiere of She's Funny That Way at the Venice International Film Festival in Italy on Friday.

Oprah joins Reese Witherspoon at a screening of the Oscar winner's new film Wild at the Telluride Film Festival in Colorado on Friday.

Kenny Chesney video-chats with George Strait on his phone while he sings the country veteran's "Carried Away" during a concert for CMT's Instant Jam in Athens, Georgia, on Friday.

Newest member of Duck Dynasty? Nope, it's Andrew Garfield, who sports a faceful of hair – with a nice suit to complement it – at the Friday premiere of his new drama 99 Homes at the Venice Film Festival in Italy (where his girlfriend, Emma Stone, is also hard at work).

Pop princess Ariana Grande hits all the right notes on Friday during a performance on NBC's Today show at Rockefeller Plaza in New York City.

In spite of his bartending aspirations, country crooner Brad Paisley still gives his fans what they want – namely, his music! – while performing for ABC's Good Morning America in New York City's Central Park on Friday.

Trying to tell us something, Kristen? Stewart lets her T-shirt do the talking as she silently makes her way through Japan's Narita International Airport on Friday. 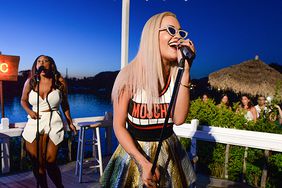