She's back on duty! After dropping off Maddox (not pictured) at his New York school, Angelina Jolie continues touring the Big Apple with daughter Zahara, 2, on Tuesday. The beaming duo reportedly hit up a nearby toy store together.

Sacrifice comfort? Never. Paris Hilton (and her pillow!) touches down at the Toronto International Airport on Monday after a weekend of partying in Las Vegas for the MTV Video Music Awards.

Mischa Barton makes a sweeping style statement in her chiffon cape at designer Marc Jacobs's runway show Monday at the New York State Armory. The actress has been in Manhattan attending parties and shows throughout Mercedes-Benz Fashion Week.

Keira Knightley continues her wave of international press appearances for her latest film, Atonement, on Monday at the Toronto International Film Festival.

Proud parents Ozzy and Sharon Osbourne ham it up while paying their respects to daughter Kelly after her debut Monday as Mama Morton in the London production of Chicago.

HE'S A SLY ONE

Despite a recent arrest, Jude Law lets his English charm shine through while presenting his movie, Sleuth, at the Toronto International Film Festival on Monday. The actor stars opposite Michael Caine in the remake of the 1972 thriller.

They may have a great view of the runway, but Tori Spelling and hubby Dean McDermott can't keep their eyes off each other Monday during the Jill Stuart fashion show at the New York Public Library.

Charlize Theron gets down to business as she prepares to film a scene with Will Smith (not pictured) for their new action movie, Hancock, in Hollywood on Monday. Theron plays the wife of a PR agent who gets involved with a down-on-his-luck superhero played by Smith.

Bringing fashion to the people, talk-show host Tyra Banks gets the crowd at New York's Port Authority Bus Terminal hyped up for an unscheduled treat: a Tracy Reese fashion show on Monday.

Hugh Jackman shows off his playful side with daughter Ava, 2, while enjoying a day Monday at Neilson Park Beach in Sydney, Australia.

Perfectly poised to take on the Big Apple, Victoria Beckham shows off her own runway-ready pose as she leaves the Oscar De La Renta fashion show on Monday.

After resurfacing from his low-key summer, Jake Gyllenhaal arrives at the U.S. Open in Flushing Meadows, N.Y., on Sunday to catch the men's final championship match.

Drew Barrymore, who enjoyed Sin City with her He's Just Not That Into You costar Justin Long last week, arrives ready to work Monday to the set of her latest flick, which resumed filming in Los Angeles.

More on Drew:
See the latest photos, news and a full bio 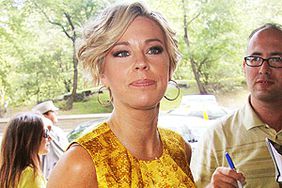