Madonna arrives at JFK Airport in N.Y.C. wearing a colorful dress paired with a black fedora on June 7.

Bradley Cooper claps it up courtside at the Brooklyn Nets vs. Milwaukee Bucks game at the Barclays Center in N.Y.C. on June 7.

Danny Trejo, Snoop Dogg and wife Shante Broadus pose at the premiere of The House Next Door: Meet the Blacks 2 at Regal L.A. LIVE: A Barco Innovation Center in L.A. on June 7.

Luke Wilson looks sharp in a blue suit at the Fort Worth premiere of 12 Mighty Orphans at the ISIS Theater on June 7 in Fort Worth, Texas.

Jordan Alexander and Eli Brown take selfies on set of the Gossip Girl reboot in Brooklyn on June 7.

Nick Robinson and Kate Mara attend FX's A Teacher FYC drive-in screening and panel at the Rose Bowl in Pasadena on June 7.

Naomi Watts and Billy Crudup take their dog out for a walk in N.Y.C. on June 7.

John Stamos, wife Caitlin McHugh and their son Billy have fun at The Lego Movie World at Legoland California Resort on June 5 in Carlsbad, California.

Shopping for a Cause

Patrick Stump, composer and theme song vocalist for Marvel's Spidey and His Amazing Friends, gets a first look at some of the new toys from Hasbro that are slated to come out later this summer.

Goldie Hawn carries a reusable shopping bag while out and about in N.Y.C. on June 7.

New mom Emma Roberts steps out for a sunny afternoon walk in Boston on June 7.

Jared Leto is seen without his trademark facial hair on the set of Apple TV+ series WeCrashed in N.Y.C. on June 7.

Ashlee Simpson keeps things casual in an oversized Rolling Stones pullover while out and about in L.A. on June 7.

Lizzo shows off her street style in a pink cardigan, pink Prada bag and patchwork denim on June 6 after grabbing lunch in L.A.

Ricky Martin waves to fans as he arrives at The Ellen DeGeneres Show — where he surprised DeGeneres with over 3,000 flowers to congratulate her on over 3,000 episodes — for her June 7 show in Burbank, California.

Simone Biles wows the crowd after competing in the vault at the U.S. Gymnastics Championships in Fort Worth, Texas on June 6.

Sophia Loren is honored with the keys to the city of Florence, Italy on June 5.

Rosalía is spotted out and about back in her hometown outside of Barcelona on June 5.

Paul Mescal accepts the best actor award for his performance in Normal People at the BAFTA TV awards on June 6 in London.

Michaela Coel takes home multiple awards for her series I May Destroy You, including best actress and best mini-series, at the BAFTA TV awards.

Paula Abdul joins members of Dance Dome LA to record dances for their social media channels at The Clubhouse Beverly Hills on June 6.

Michelle Williams takes the stage at the 2021 Virtual Essence Festival of Culture at UNO Lakefront Arena on June 6 in New Orleans.

Sophie Turner and Joe Jonas are spotted taking in the game as the Atlanta Braves play against the Los Angeles Dodgers on June 6 in Atlanta.

Mario Lopez attends the 28th Annual Race to Erase MS: Drive-In Gala at the Rose Bowl with his wife Courtney and their son Dominic on June 4 in Pasadena, California.

John Krasinski chats with Edgar Wright at the London Screening and Q&A for A Quiet Place Part II on June 6.

Dwyane Wade and Gabrielle Union are spotted leaving their dinner date at Nobu in Malibu.

Billy Porter celebrates the Pose finale at the FYC Drive-in Series in Pasadena.

Bella Hadid steps out in a red tracksuit for a stroll around New York City.

Beyoncé and Jay-Z get close at the Brooklyn Nets vs. Milwaukee Bucks game in N.Y.C.

Sara Bareilles and Joe Tippett pose at the Let's Get This Show on the Street: New 42 Celebrates Arts Education on 42nd Street in Times Square.

It Won't Be Long Now

Save Room for Her

Tinashe goes for a classic look after enjoying a night out at Poppy in West Hollywood.

Keep on Keeping Up

Paris Hilton takes over the DJ Booth at E11EVEN Miami on Thursday, June 3, 2021.

The Marvelous Mrs. Maisel costars Michael Zegen and Rachel Brosnahan are spotted back on set on June 4 in N.Y.C.

Brooke Shields shows off the unique sleeves on her vibrant dress at the Veuve Clicquot Cocktail Hour at the New York Botanical Garden on June 3 in N.Y.C.

Karl Urban and Jack Quaid are spotted filming The Boys in Toronto on June 3 in Toronto.

Elizabeth Hurley (who recently spoke to us for our PEOPLE in the '90s podcast!) turns heads as she arrives at the inaugural British Ballet Charity Gala, presented by Dame Darcey Bussell, at The Royal Albert Hall in London on June 3.

Anderson Cooper waves as he heads to work on his 54th birthday on June 3 in N.Y.C.

Vanessa Hudgens is dressed to the nines for a themed party in an L.A. park with pals on June 3.

Sara Bareilles and Yola take the stage at the Fifth Annual Love Rocks NYC Benefit Concert Livestream for God's Love We Deliver at The Beacon Theatre on June 3 in N.Y.C.

Also at the benefit concert: a smiling Bill Murray and Jon Bon Jovi.

Jennifer Lopez steps out in a floaty maxi dress (and that signature J.Lo glow) while out and about on June 3 in L.A.

Zachary Levi is seen in costume filming Shazam! Fury of the Gods on June 3 in Union City, Georgia.

Linda Cardellini sports a floral-print dress while headed to the Los Angeles set of Dead to Me on Thursday.

New mom Christine Quinn is back in action on Thursday, filming Selling Sunset in Beverly Hills.

David Spade steps out with his headphones in in Beverly Hills on Thursday, one day after news broke that he'll be hosting the upcoming season of Bachelor in Paradise.

Diddy cracks up on Wednesday night at the Black Tie Affair for Quality Control Music CEO Pierre Thomas at the Fox Theater in Atlanta.

Another day, another costume for Lily James, who hits the set of Pam and Tommy in L.A. on Wednesday.

Anthony Mackie and his Captain America likeness hit the stage at the Avengers Campus dedication ceremony at Disneyland's California Adventure Park in Anaheim on Wednesday night.

Saweetie sparkles on Thursday night while arriving to a party at the Highlight Room in L.A.

Jenna Lyons and Lea DeLaria get silly on Wednesday night at The Lesbian Bar Project presented by Jagermeister at Harbor NYC.

Bridgerton's Phoebe Dynevor gets dressed up for the launch of The Parlour at The Ned in London on Wednesday night.

Kate Mara keeps covered up while out in Los Angeles on Wednesday.

Serena Williams is all smiles after winning her second round match at the 2021 French Open in Paris on June 2.

Eddie Redmayne is seen filming The Good Nurse in Stamford, Connecticut on June 1.

Vanessa Hudgens leaves the Dogpound gym after a workout in West Hollywood on June 2.

Rachel Brosnahan and Marin Hinkle pose in costume on the set of The Marvelous Mrs. Maisel on June 1 in N.Y.C.'s West Village.

Matt James takes a Citi bike for a spin around N.Y.C. on June 1.

Olivia Culpo leaves her pilates class in a black matching set and slides on June 1 in West Hollywood.

Tyler Cameron and girlfriend Camila Kendra catch a flight to N.Y.C. on June 1.

Kaia Gerber steps out in a comfy outfit with her hands full as she makes her way through L.A. on June 1.

Joe Manganiello wears a blue button up and jeans while out in L.A. on June 1.

Kit Harington stops for snacks while running errands in N.Y.C.'s Upper West Side on June 1.

Emily Ratajkowski wears a green matching set while out in N.Y.C.'s Tribeca on June 1.

Margaret Qualley wears a hoodie, sneakers and a Celine bag out in N.Y.C. on May 31.

Born to Be Wild

Avril Lavigne takes a ride on a hot pink electric motorcycle in Malibu on May 31.

Normani celebrates her 25th birthday in an all-leather look at Craigs in L.A. on May 31.

Zach Braff tosses a toy to his dog at a Pasadena dog park on June 1.

Jon Hamm picks up some flowers while grocery shopping in L.A. on May 30.

Talk of the Town

Bridgerton star Phoebe Dynevor takes a sunny stroll on May 31 in London.

Katie Holmes is seen walking through N.Y.C.'s Soho neighborhood with art supplies in tow on May 27.

Chris Martin and pal Gavin Rossdale head to brunch together in Malibu on May 30.

Spike Lee shows his support for the New York Knicks as they take on the Atlanta Hawks on May 28 at State Farm Arena in Atlanta.

Kendall Jenner and boyfriend Devin Booker are seen grabbing coffee and groceries in Bel-Air on May 29.

Mary J. Blige is inducted into The Apollo Theater's Walk of Fame on May 28 in New York City.

Wonder Woman actress Gal Gadot grabs baguettes and other treats from a bakery in L.A. on May 30.

Bethenny Frankel goes for a swim in a red one-piece bathing suit on May 30 in Miami Beach.

Rafael Nadal jokes around while practicing on the court during the French Open on May 29 in Paris.

Matt James and Rachel Kirkconnell hold hands while out for a stroll in the Hamptons together on May 30.

Jennifer Garner holds hands with her mom Patricia Ann while out and about in L.A. on May 28.

Long May They Rainbow

Paris Hilton and fiancé Carter Reum get matched up for a Malibu shopping trip.

Lizzo is all smiles wearing a bright pop of color on a night out in West Hollywood.

Naomi Osaka wins her first match of the 2021 French Open only to be fined $15K for not speaking to the press.

Rob Lowe enjoys a day at the beach with his son, John Owen Lowe.

Eva Longoria is all smiles in all white as she steps out with friends in Beverly Hills.

John Krasinski and J-Mac are buddy-buddy at a Houston screening for <em>A Quiet Place Part II</em>.

Rachel Brosnahan gets back into character on the set of <em>The Marvelous Mrs. Maisel</em> in N.Y.C.

Chris Hemsworth and Elsa Pataky grab breakfast with their parents in Woollahra, Australia. 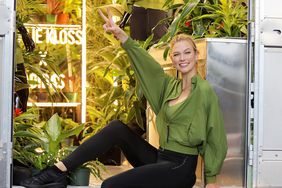 Karlie Kloss Shows Off Her Sporty Style in N.Y.C., Plus Jason Sudeikis, Bryan Cranston and More 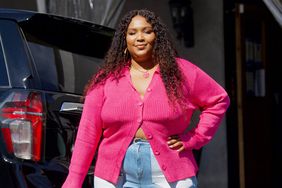 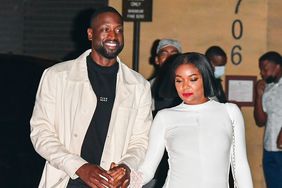 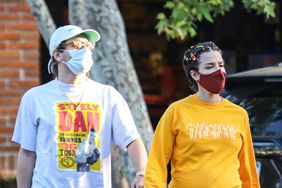 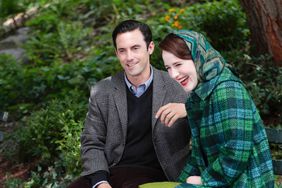